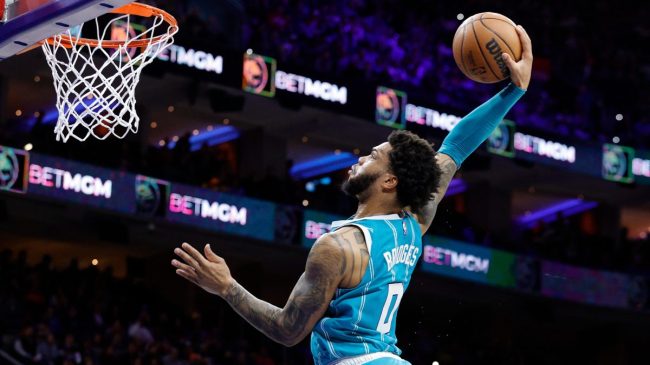 Miles Bridges is focusing in on a very specific topic on Twitter this week. The Hornets forward is looking to land a contract extension in Chalotte following his most productive year to date.

The fourth-year player will enter year five in 2022 after posting 20.2 points per game to lead the team while chipping in 7.0 rebounds and 3.8 assists.

Last year, Bridges was talked out of accepting a $60 million extension by his agent, a move that now looks like it’s going to pay off. He should see much more value after last year’s breakout performance, and he’s asking for a near max offer deal.

Per Shams Charania of The Athletic:

That could be something north of $130 million over four years, more than doubling last season’s reported offer.

The problem is that the Hornets are hesitant to give the big man that kind of money. That doesn’t mean they won’t, but it allows other teams to try and lure Bridges away from Charlotte.

The news of Bridges’ contract negotiations has made headlines on social media. But it’s Bridges, himself, who’s making the most noise.

Miles Bridges keeps the receipts of his Twitter haters

Bridges has gone on a social media spree, liking every comment he can find from fans that don’t believe he deserves a max deal. Take a look.

Bro had one nice season and he wants the max. Gotta respect it but in no universe is miles bridges a max contract nba player

Bridges is obviously keeping the receipts of his haters. If he does land a max contract in Charlotte, you can bet he’ll remember those that doubted.