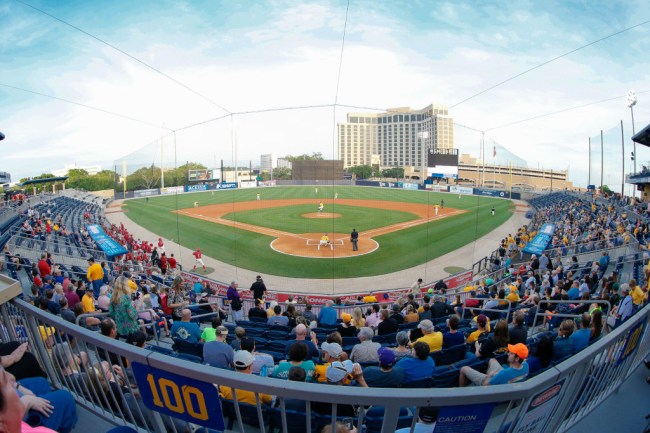 With the 2020 Minor League Baseball season being canceled due to the coronavirus, there are plenty of baseball parks around the country sitting abandoned this summer. Some organizations, however, are turning their outfield into golf courses.

Back in June, it was the Portland Sea Dogs that transformed their ballpark, Hadlock Field, into a 9-hole golf course and now the Biloxi Shuckers have followed suit.

According to WLOX, the outfield serves as a 9-hole chipping course from 8:00 AM to 2:30 PM with a green fee of $25. At 4:15 PM the fun really starts as the stadium turns into target golf, with golfers hitting balls from two-party decks.

“You know it is similar, you know, like a Top Golf driving range experience where you can just take swings, enjoy soft drinks or a beer while you’re out here, or you can aim for targets. I think it’s for everybody and it’s gonna be a great time,” Matifes said.

Having a couple of beers with some buddies and taking some swings at a minor league ballpark sounds like a good time.

It’s really a no brainer for these minor league teams to turn their ballparks into some sort of attraction to have at least some sort of money coming through the gates. Having people come to the park with a few golf clubs, spend some money to hit a few shots, and grab some food from the concessions stand is a solid idea. It’s surprising we don’t see more teams do this during the offseason.