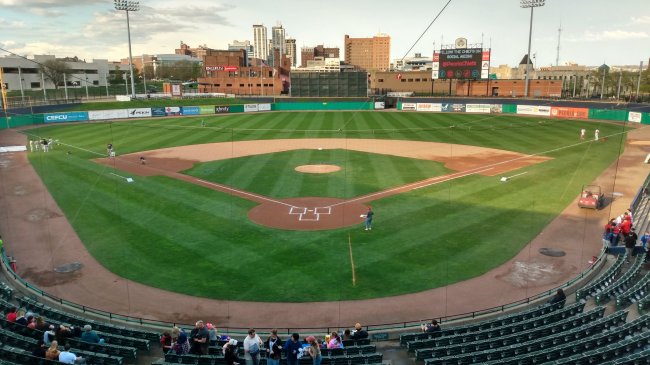 There are some in the world of sports that find themselves revolutionizing the game the play. There are others who changed the game years ago and for some reason the rest of the world just hasn’t caught up yet.

The Wisconsin Timber Rattlers undoubtedly find themselves in that second category. A recent video has introduced the world to their “Bratzooka”, a tradition they’ve upheld for the last 24 years.

The Bratzooka is exactly what you would expect it to be. It’s like a t-shirt canon if t-shirt canons fired bratwurst instead of t-shirts that sit in your drawers for years at a time. Seriously, why isn’t everybody doing this now?

Most people at sporting events aren’t interested in catching a size medium t-shirt that only their middle school self would be able to fit in. They want food. They want brats and hot dogs and burritos and anything other food that can wrapped in food and fired from a cannon rather than waiting 15 minutes in a concession stand line to spend 12 bucks on some chicken fingers.

The Bratzooka has been a staple of Timber Rattlers games since 1998, when the team reportedly spent $10,000 on a hot dog launcher after seeing one at an All-Star game and deciding the team needed one.

Ever since that decision, a giant bratwurst has been firing bratwursts into the stands of Timber Rattlers games at the end of every 4th inning. The Bratzooka reportedly fires about a dozen bratwursts per home game, which means there are 840 brats launched into the stands per season for a grand total of 19200 brats before this season started.

Take notes everybody else. The Timber Rattlers and their Bratzooka seem to have the perfect answer to entertaining fans at sporting events.