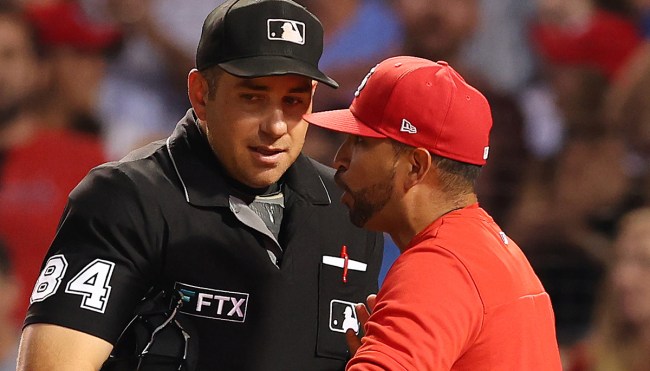 Plenty of baseball fans genuinely believe the almost sanctified “human element” that results in umpires routinely messing up a seemingly obvious call is an integral part of the sport—an aspect that still remains the root of an absurd amount of controversy in the modern game when you consider the technology we currently have at our disposal.

There are a number of arguments those traditionalists trot out to argue for the preservation of this fountain of frustration, like the fact that players and coaches have had to deal with the fallible nature of the boys in blue since the inception of Major League Baseball.

With that said, that line of reasoning starts to fall apart when you consider Civil War veterans with names like Mordecai Pennywhistle didn’t have the luxury of turning to instant replay to settle a dispute with an ump who looked identical to the guy in the W.B. Mason logo.

Of course, Major League Baseball has made some strides to address this longstanding point of contention, and based on the experiments the league has been conducting in recent years, it seems like it’s only a matter of time until robot umpires get called up to The Show.

Unfortunately, we’re still regularly treated to reminders of how nice it will be when that day finally arrives—including one that came out of Wednesday night’s game between the Cardinals and the Cubs.

In the top of the third inning, St. Louis third baseman Nolan Arenado had the chance to put a dent in the three-run deficit his club was facing when he stepped up to the plate with runners on first and second. It initially looked like he’d been able to load the bases by drawing a walk on a full count, but home plate umpire John Libka brought the inning to an end by ruling he’d failed to check his swing.

Arenado was obviously not pleased with that development, although Libka did seem to be pretty amused when he smiled after ejecting him for arguing the call.

Nolan Arenado was HEATED after this called third strike 😳

Nolan Arenado was thrown out the game after arguing a checked swing for strike three pic.twitter.com/QONubQJESx

Plenty of fans also took issue with the ruling, with many of them taking aim at Libka over his perceived smugness.

The home plate umpire literally smirked and laughed as he ejected Nolan Arenado. What is going on lately with the hubris of these @MLB umps? Embarrassing for the entire sport.

That smirk. That arrogant, snide grin is what really upsets me about all of this. Absolutely uncalled for.
Why not appeal down to the first base umpire?
Arenado is a competitor who plays with passion. This from the HP Umpire is downright pathetic. All around BAD. FOR. BASEBALL. https://t.co/4eqW5i6hSi

Ump doesn’t appeal to 1st then smiles as he tosses Arenado… @MLB needs to fix its umpire issue. Horrible strike zones and they seem to think they are who the fans pay to see… @Cardinals #STLCards

Brad Thompson just said it best, “Smug, arrogant and uncalled for” referring to the home plate ump and his stupid grin in Arenado’s face 😒

This incident occurred just a few months after Angel Hernandez was filmed smirking at a fan who called him out for a similarly underwhelming performance and is just the latest of the many moments that have highlighted the lack of umpire accountability players and fans have bemoaned.

Unfortunately, it doesn’t seem like the MLB is in a huge rush to address it.