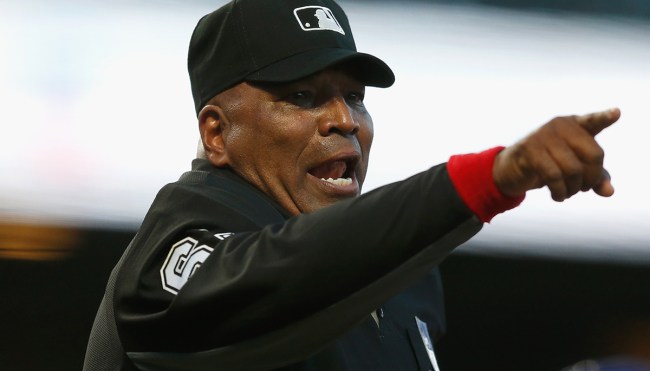 On Wednesday, MLB commissioner Rob Manfred found himself in a fairly rare position after ending up in the good graces of baseball fans for one of the first times in recent memory by revealing the league was seriously considering switching over to the robot umpires who could be tasked with calling balls and strikes as early as 2024.

Most people were thrilled to hear AAA games would be used as a proving ground for the technology this season, and the need for change has only been reinforced over the past few months as Angel Hernandez has continued to do Angel Hernadez things while other umps have routinely shown why they should be replaced sooner rather than later.

Earlier this week, retired third baseman Will Middlebrooks explored the root of the problem on The Wake and Rake Podcast and asserted the biggest issue was the lack of accountability umpires face.

A post shared by WAKE and RAKE Podcast (@wakeandrakepod)

The former player made a number of valid points, as he noted there’s no mechanism in place to demote umpires or even force them to address the media after games. He also suggested the best way to fix the issue is to offer incentives to the ones who excel at their job.

Middlebrook’s comments were largely inspired by Doug Edding’s lackluster performance behind the plate during a game between the Blue Jays and the White Sox last week.

However, it appears Laz Diaz felt the need to defend the honor of his profession. Unfortunately, he really only helped proved Middlebrooks’ point by getting unnecessarily personal in a comment where he mocked the infielder for failing to live up to the expectations that surrounded him when he made his debut with the Red Sox in 2012.

It didn’t take long for Diaz to make his account private after getting called out, and if past history is any indication, we can probably expect absolutely zero punishment to be doled out as a result.