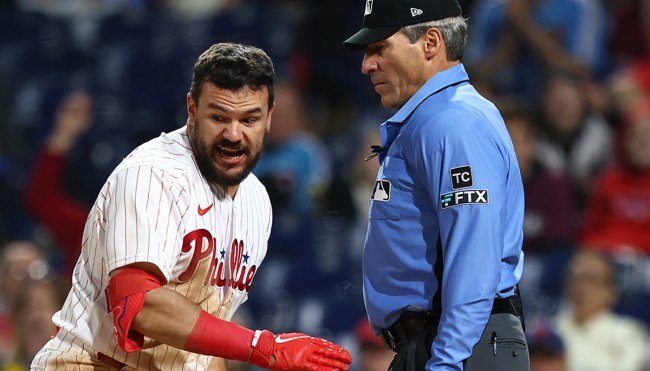 As a general rule, any referee, umpire, or other official who manages to become a household name among sports fans didn’t achieve such a distinction by setting the gold standard for their position thanks to their unwavering consistency when it comes to enforcing the rules of a game.

There are certainly exceptions, but in the vast majority of cases, the only time “consistency” gets mentioned in the same sentence as the people in question is when it relates to their ability to make fans want to rip their hair out or throw their remote through a wall thanks to a history of inexplicable calls.

That’s long been the modus operandi of Angel Hernandez, who has somehow made a living in the MLB for over three decades. Hernandez has routinely landed near the bottom of the rankings in player polls concerning the worst umpires in the league, and he certainly hasn’t gotten any better with age thanks to the number of controversial calls he’s been responsible for over the past couple of seasons.

However, the 60-year-old may have officially outdone himself during Sunday night’s game between the Phillies and the Brewers. While there’s no way to know if he had a flight to catch, that seems like the only explanation for his truly atrocious performance behind the plate, as he rang up six batters on pitches that were outside of the strike zone—including Kyle Schwarber, who was not shy about voicing his displeasure after getting punched out in the bottom of the ninth.

Umpire Angel Hernandez was the lowest rated umpire on the day, missing 19 calls for a correct percentage of 85.3%.

He rang up 6 batters on pitches that were outside the zone and called a strike to Jean Segura that missed inside by a season high 6.47 inches.#Brewers #Phillies pic.twitter.com/pmmt1ELJJ6

As Umpire Auditor notes, Hernandez also managed to unseat Adrian Johnson for the dubious distinction of the worst strike call the MLB has seen this season thanks to a pitch that was almost six-and-a-half inches inside.

Schwarber wasn’t the only person to unload on Hernandez on a night where Philadelphia would ultimately lose to Milwaukee by a score of 1-0, as a Phillies fan waited outside Citizens Bank Park and gave the ump a piece of his mind while he was leaving the stadium.

Based on the reaction, Hernandez seemed to relish the criticism, as he flashed a smirk at the hater in question while driving away (“You stink and I don’t like you” is an objectively hilarious chirp, but it’s hard not to interpret the smile as anything other than “You peasants are powerless to stop me”).

“Angel Hernandez you stink and I don’t like you” pic.twitter.com/6hsasoi9sG