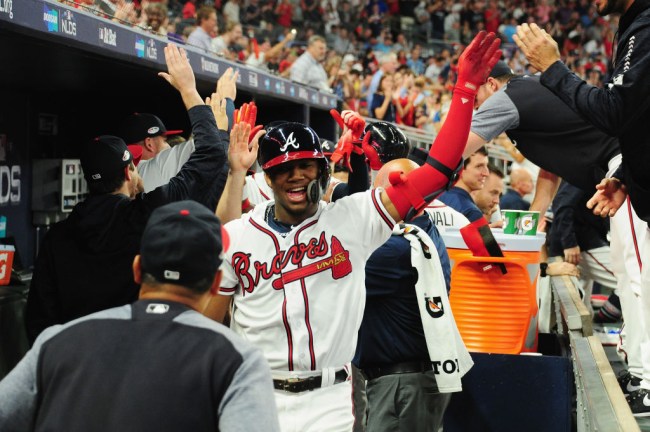 The MLB playoffs may have come to an abrupt end for the Atlanta Braves and 20-year-old stud Ronald Acuna Jr., but, even though the team was eliminated in four games by the Los Angeles Dodgers, the unexpected postseason appearance will forever live on for Braves fans. And one guy went to great lengths to take Acuna’s most thrilling moment from the playoffs with him to his grave.

Prior to his team’s elimination in Game 4, back in Game 3 of the NLDS, Ronald Acuna Jr. went beast mode by taking a 3-1 pitch from L.A.’s Walker Buehler to deep left field for a grand salami, which gave the Braves a 5-0 lead, eventually leading to a win to keep their season alive. To put it bluntly, the dude yoked it, so here’s a look at the big fly.

The dinger wasn’t just big for the Braves to help stave of elimination, but it was historic in the sense that Ronald Acuna Jr. became the youngest player in MLB playoff history to hit a grand slam. So, yeah, it was pretty impressive all around. That said, was it tattoo worthy? For Braves fan Caitlin Pannell, it sure as hell was!

That’s because, right before the slam, Caitlin tweeted out that she’d get Acuna’s face tattooed on her arm.

Rather than wuss out and fold under the pressure of Acuna’s face on her arm for eternity,Caitlin Pannell owned up to her promise and got her new ink. What do you guys think of the finished product?

I tweeted, it happened, I did it. NO LIE. Thank you so much @baileysouthside and @MysticOwlTattoo!!! @Braves @ronaldacunajr24 @BleacherReport @Cut4 @MLBNetwork pic.twitter.com/d5qtB8viW9

Good on Caitlin for owning up to the promise and getting Ronald Acuna’s face. I mean, how many of us have been drunk and said something stupid like this before and “misremembered” like Roger Clemens once famously said? Yeah, probably 95 percent of us.

Anyway, what makes the whole thing a little bit cooler is that Ronald Acuna’s grand slam came after a the Dodgers’ pitcher, Buehler, clearly got a gift of a high strike call on the 3-0 count. Sorry ’bout it, though, because joke ended up on him when Acuna went yard to score four runs instead of one.

People do a lot of irrational things, but, because sports, getting a tattoo of a player or team seems totally normal. Just another reason why you’ve got to love the games and players we love.