OK, So The Virtual Fans That FOX Sports Will Be Using For Games During The MLB Season Are Actually Dope AF 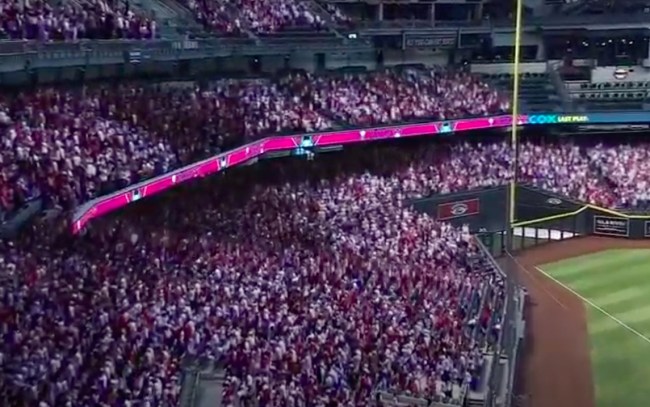 With the MLB season officially upon us — thanks to quite the crappy first pitch from Dr. Anthony Fauci before the Nationals game — baseball fans finally have something to look forward to. While none of us will physically be able to attend a game this year, which is a major bummer, we will have the chance to watch the 60-game regular season sprint on TV and through mobile apps. It’s a season like never before, and I’m here for it.

Thing is, most of us watching games this MLB season may still find it a little weird without anyone in the stands, since it’ll be like watching batting practice that actually means something. Gone will be the drama. Missing will be the anticipation. And, of course, we’ll be lacking those strange fan interactions that always seem to happen during games.

But not all is lost, because, thanks to FOX Sports’ virtual fans, people watching on TV will at least be tricked into thinking there are thousands of diehards inside the stadiums during broadcasts.

That’s right, FOX Sports, which recently released a teaser to show how their fake fans will look during MLB games this season, is going fully virtual, and will pump crowd noise into broadcasts, while also having the virtual fans partake in things like the wave and early exits during a blowout. Take a look below at the video highlighting the cool idea.

Shit, this might be the coolest thing I’ve seen happen in sports in a long time. Seriously, while watching that teaser above, you can’t tell me it doesn’t feel like the real thing. Brilliant move by FOX Sports, and awesome plan to implement it during an already weird MLB season — one in which players can’t even spit.

According to Sports Business Journal, the virtual crowd won’t be able to be in every shot — like frames featuring closeups of a player — but on wide shots (which are generally the ones viewers get anyway — FOX’s virtual fans will make watching a game this season feel, well, normal. Here’s what Fox Sports CEO & Exec Producer Eric Shanks had to say about the idea coming to fruition.

“Up until four months ago, none of us thought that was a problem we would need to solve,” Shanks said. “We don’t know where it’s going to go. It’s another jumping off point to all types of innovation. Maybe we do want to make every stadium for every game feel like it’s a sellout. Will that make viewership go up if every game everywhere was always a sellout? Would people watch more? I don’t know.”

“We’re doing it because we think it’s going to make the engagement of watching the game better.”

Shanks said the technology will improve as the season wears on. Eventually, for example, viewers will be able to see the virtual fans reaching for home runs. FOX is working on elements to produce things like ‘KissCam’ in between innings.

“Fans play such a big role in your enjoyment at home,” Shanks said. “When you see a sport and you see an empty stadium or empty arena, you’re like, ‘Why am I watching this if nobody even bothers to go to the game?'”

Some old school baseball traditionalists (AKA Boomers) are bound to be upset about what FOX Sports is doing here. But, screw them, because incorporating virtual fans into games broadcast by FOX is just the latest way that the MLB season is going to be a better product for viewers; and that’s sure to help the popularity of the sport.