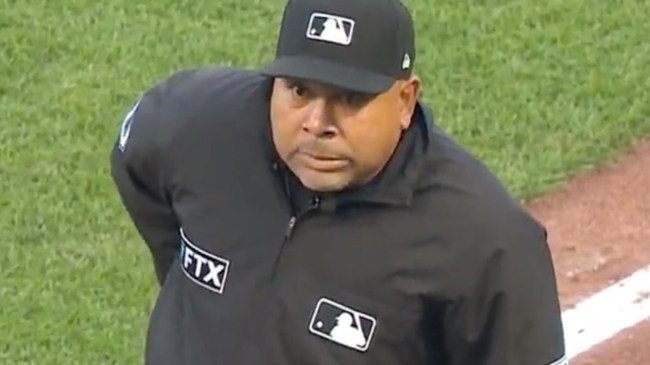 The world of sports has produced countless cautionary tales concerning the potential perils of being equipped with a microphone capable of broadcasting your words to the masses at some fairly inopportune moments—including plenty of situations where people have fallen victim to what’s known as a “hot mic.”

In 2021, NHL referee Tim Peel found himself out of a job after he seemingly admitted to fabricating a penalty call without realizing the entire world could hear what he was saying. He’s not the only official who’s ended up in a sticky situation thanks to that kind of inadvertent confession, but in most cases, those errors are simply embarrassing as opposed to career-ending.

That includes the many occasions where a hot mic has resulted in someone uttering something you’re not supposed to say on television, which was the case with another NHL ref who was caught tossing a “F—k you” at a player who complained about a call (an incident one of his colleagues expertly avoided a repeating last season).

On Tuesday night, MLB umpire Adrian Johnson became the newest member of that unenviable club thanks to what unfolded during a contest between the Padres and the Giants in San Francisco.

In the top of the second, it appeared San Diego’s Brandon Drury hit into a double play to bring the inning to an end. However, the bang-bang call was ultimately challenged, and the replay showed he’d narrowly beaten the throw to first base.

While it seemed like a pretty straightforward reversal, things took a very amusing turn when Johnson went to announce the call was overturned, as the ump had a hilarious reaction after realizing the “Oh s—t” he dropped while fiddling with his equipment was picked up by the microphone that blasted it out to the entire world.

This umpire on a hot mic:

A lot to unpack on this review

1: A fan yells out "Is Angel Hernandez on the field?"