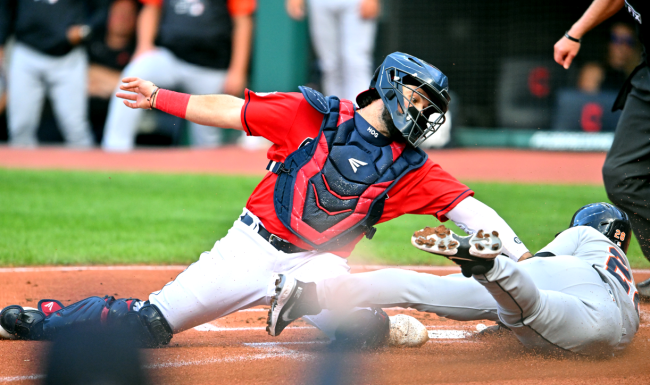 Major League Baseball umpires have always been the target of criticism. It’s just part of the game. This year, however, the criticism of MLB umpires now occurs so often that many players and fans are legitimately wanting the league to actually do something about it.

During the first inning of the Cleveland Guardians and Detroit Tigers game, the home plate umpire initially ruled Javier Baez out at the plate for the third out of the inning.

The Tigers then used one of their challenges, leading to a review of the play.

After the review, it was announced that Baez was safe (despite being tagged out) because the catcher, Austin Hedges, supposedly interfered with Baez’s ability to have a sliding lane to the plate.

After appearing to get Javy Baez out at the plate, replay overturned the call due to Austin Hedges blocking the plate pic.twitter.com/TUsJj4WJPK

So, instead of the inning being over, the Tigers got that run and then added two more runs during the extended inning, helping them win the game 4 to 3.

After the game, Hedges went off on the umpires, likely drawing a nice little fine in the process, about how MLB umps have “no accountability.”

“First of all, it cost the game,” Hedges said following the loss. “The play has been called a few times now recently that really has never been called before. For some reason, New York feels like they need to take over the game and change the way the game is played. Guys are just out. There are plays at home that are beating the runners and for 150 years, you’re out. And now, we’re calling some type of rule that is really tricky to define.”

“There’s no accountability on their part right now,” Hedges continued. “And that’s really, really sad. I don’t know why. But there needs to be a little bit of — we talk about equality in this world right now. There ain’t no equality with that. These guys are going out there with no responsibilities. They say, ‘Okay, here’s a play where I can show my power. Here’s a play where I can take over the game.’ And that’s not the game that we play. That’s not the game that we’ve played forever. They’re trying to take over the game and they’re trying to change the game and it’s disappointing.”

Hedges is now the second player to call out MLB umpires for a lack of accountability this week. The usually quiet Anthony Rizzo said the same thing after the home plate umpire made a call he disagreed with during Monday’s Yankees game.

This is rare out of Rizzo pic.twitter.com/EN9m33RimJ

“We’re out here competing at the highest level. I’m up here talking to you guys, I feel like the umpires have zero accountability when they miss something like that,” Rizzo said after the game.

In another game on Tuesday night between the Los Angeles Angels and Seattle Mariners, a pitch by Angels pitcher Jesse Chavez was called a ball when it was clearly inside the strike zone.

It would have been strike three, had it been called correctly. Instead, the batter, Eugenio Suarez, ended up walking.

The next batter, J.P. Crawford ended up flying out, which should have been the third out of the inning.

So instead of going into the bottom of the ninth down just 3 to 2, the Angels were now behind 8 to 2 and the game was all but over.

To be fair it wasn't right down the middle@Angels | #GoHalos pic.twitter.com/aIl29auncN

Monday night in the top of the ninth inning of a tie game between the Angels and Mariners, home plate umpire Laz Diaz awarded Seattle’s Carlos Santana a walk on just three balls. The Mariners would end up scoring four runs in the inning following the mistake.

That incident was the second time this month that a home plate umpire didn’t know what the count was on a batter.

Umpire Jim Wolf give Houston Astros’ slugger Yordan Alvarez four strikes in an at bat in a game versus the Red Sox a couple of weeks ago.

Luckily, that mistake didn’t affect the outcome of the game like these other umpiring gaffes.

It really shouldn’t take luck though. Major League Baseball umpires need to be better, period. Especially for a sport that consistently struggles to maintain, let alone grow, its fanbase.

the umpire union is genuinely destroying the game, umps let their egos get in the way and then the union protects them

To understand the intensity of Hedges’ disgust, you have to know that this guy is one of the most happy-go-lucky guys in MLB. A true joy to watch play on and off the field. For him to be this angry shows a real need for MLB to take notice of his concerns—and not w/ a fine!

Good to see players start to call out the umpiring

Mariners fan, but that was ridiculous. No one wants to win like that.