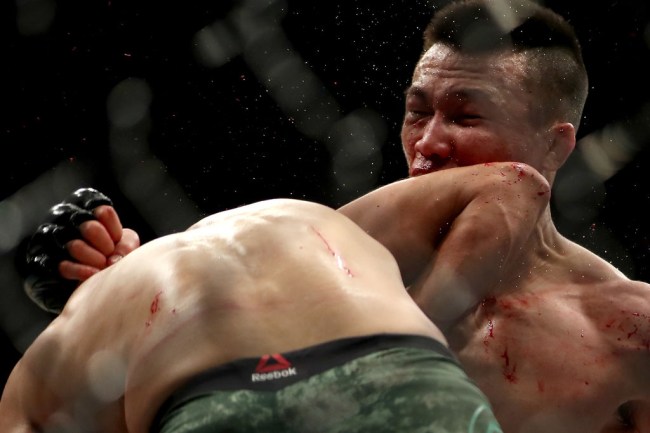 Chan Sung Jung aka “The Korean Zombie” and Yair Rodriguez produced a fight no one at Pepsi Center in Denver will soon forget. During Saturday night’s UFC Fight Night 139 headliner, Rodriguez (11-2 MMA, 7-1 UFC) delivered a crushing fifth-round knockout of Jung (14-5 MMA, 4-2 UFC) with just one second left, securing the obvious choice for “Fight of the Night.”

At the time of the devastating upward elbow, The Korean Zombie, who hasn’t fought since February 2017 due to injury, was ahead 39-37 on two judges’ scorecards heading into the final round. On top of injuries, Jung has also completed his mandatory military service in South Korea, thus allowing him to fight only three times in the past five years, Bloody Elbow reports.

If Jung was feeling a bit rusty, it certainly didn’t show for the marathon match. He just happened to be fighting an exceptional fighter and got dropped by a move of immense skill and technicality. According to the scorecard, Jung only needed to survive the final second of the match to win the fight at minimum by split decision, as two of the three judges had Jung up three rounds to one heading into the last round.

Check out the knockout at the buzzer below.

1 second left… No better way to go out on the 25th Anniversary! pic.twitter.com/aGg1Z0bAeO

Did you catch that?

After the match, both fighters were taken to the hospital after sustaining injuries from the violent fight. Both warriors congratulated the other on one of the great matches in the sports history.

Jung has since released a statement from his hospital bed via his Facebook page:

“I have no excuse. To everyone who has helped me, I’m truly sorry… thank you… to everyone who hates me, congratulations. I am not in a good enough condition to get on a plane so I will spend a few days in the hospital before going back to Korea. I am embarrassed, but I will see you when I get home.”

Dude, you got nothing to be ashamed of.