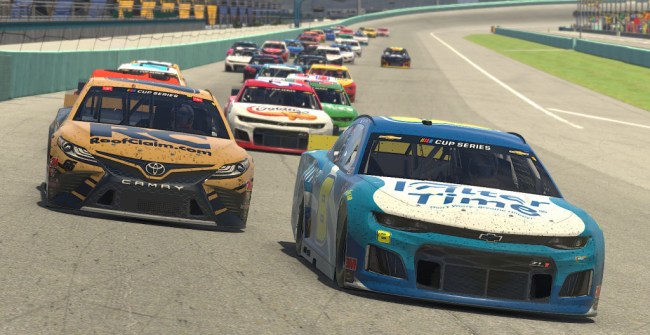 Dana White appears to think “buying a private island” is the best solution to combat the issues the UFC is currently facing, but aside from that, basically every other organization that oversees a competitive sport has opted to pull a Jon Taffer and shut things down for now—including the ones that govern auto racing.

The last weekend in May is typically the biggest one on the motorsports calendar, as Formula 1 holds its most prestigious race in the form of the Monaco Grand Prix, IndyCar has the Indianapolis 500, and NASCAR runs the Coca-Cola 600, its longest race of the season.

This year, things will be different. The Monaco Grand Prix has been canceled and the Indy 500 was bumped to late August. NASCAR still hopes to resume its season in time for the race on May 24, but given how up in the air things are right now; there’s no one on the planet who can definitively say whether or not that’s going to happen.

While most other sports are feeling the strain when it comes to maintaining a strong presence on television and social media—especially considering how just about every aspect of life is on hold—the racing world has a trick up its sleeve.

Over the last few weeks, each major series has hosted a number of virtual races. NASCAR and IndyCar have used the iRacing simulator while F1 went the synergy route and hosted events using the video game branded with its name.

Regardless of the platform, the result is the same. You’re giving people a product that is about as close as any sport could get to the real thing in a time like this, resulting in the opportunity to keep fans at any level—die-hards, casuals, or newcomers—engaged.

I was a huge NASCAR fan as a kid. In fact, my parents’ favorite party trick when I was a four-year-old was to have me name all the drivers from that era. It was the late 90s and early 00s, so I was rattling off guys like Jeff Gordon, Dale Earnhardt, and Bill Elliott like the ABCs.

Over time, I drifted away from the sport and considered myself firmly in the “casual fan” category from that point on. That isn’t to say I didn’t pay any attention, as I’d throw on a race here and there and even made a trip to the Daytona 500 (a pilgrimage I feel like every sports fan should make at least once).

Over the last year or so, I’ve started to dip my toe into the motorsports water once again. I watched the end of the 2019 F1 season, and once that was over, I began to twiddle my thumbs until Daytona rolled around. Once it did, I was back on the motorsports train.

I made sure I was able to watch the season’s next three races at Las Vegas, Fontana, and Phoenix and was very much looking forward to F1 kicking off its batch of events with the Australian Grand Prix until the world suddenly went to shit.

I assume there are a lot of people like me at the start of every season who are either making a return to a sport or getting into it for the first time. If that is indeed the case, having things unexpectedly interrupted has the potential to be catastrophic when it comes to keeping fan engagement and interest alive.

Hockey has had this problem, as it sometimes still feels like the NHL is trying to get everyone back on board after the lockout that canceled all of the 2004-05 season and the other one that canceled the first part of the 2012-2013 season.

Motorsports are uniquely positioned to offer a virtual product that is about as close as any sport could get to the real deal. The lineups for these virtual races have included current drivers, some notable names who came out of retirement, and a few gaming pros who’ve been introduced to a wider audience thanks to their ability to expertly navigate a virtual world like they’re in Tron.

Following the same social distancing guidelines that we’ve all become so familiar with that we can recite them in our sleep, the drivers taking part in these races are competing from the comfort of their own homes. However, you do need a special setup for iRacing, as an Xbox controller just won’t cut it.

Other setups are far more elaborate, like the one this year’s Daytona 500 winner Denny Hamlin has been using.

Prepared for a long night in the sim. The competition is getting faster and I’m streaming on my Twitch channel tomorrow. Running in the back half wouldn’t be fun for either of us. Twitch channel is https://t.co/pz3F1cc9jd pic.twitter.com/JAvDq4AurJ

The virtual cars at these races all use the same configuration, which makes for a nice even playing field that allows each driver’s sim racing ability to shine. Many of the drivers who compete have extensive time spent using racing sims, either as a way of learning the tracks or just for fun.

For the most part, the races themselves feel like you’re watching the real thing. The graphics are lifelike and the tracks themselves have been painstakingly scanned to make them behave as close as possible to their real-world counterparts.

It can be hard to convince your traditional sports fans that esports of any variety are the wave of the future, no matter how many numbers you throw at them or how many videos of a packed house of spectators going nuts at a tournament you try to get them to watch.

To draw in that sort of fan, the trick is to make the races feel like any regular race on TV would while still acknowledging the novelty of it all. NASCAR and IndyCar have all done just that.

The iRacing event NASCAR hosted at the end of March aired on Fox and FS1 and featured the network’s usual broadcast team of Mike Joy and Jeff Gordon. IndyCar also used its regular announcers for a virtual race at Watkins Glen the same weekend. While that event was only streamed online, it was apparently successful enough to make its way to NBC Sports.

The broadcasts of the virtual races feel like any other telecast that NASCAR or IndyCar would put on, which is something that no sport can really say at the moment.

Other leagues are opting to use video games to simulate their schedules just to keep fans entertained, as the NBA set up a players-only NBA 2K tournament that was entertaining in theory but had a fatal flaw because how skilled you are at basketball has almost nothing to do with your prowess on the virtual court.

After all, you can’t hit a free throw in real-life with a well-timed flick of the right joystick.

This is the huge advantage that motorsports have over all other sports at the moment. Drivers are competing by steering, shifting gears, and jamming the accelerator all the way to the floor, just as they would if they were sitting in actual cars.

It’s a formula that will give the sport its best shot at making sure that all kinds of fans will stay engaged, but even if you don’t consider yourself one, I highly urge you to use some of the boatload of free time you now have to give one of these events a chance. I can’t promise it’ll be as compelling as the marble races you got too invested in on The Ocho but it’s not like you’re doing much else with your life.