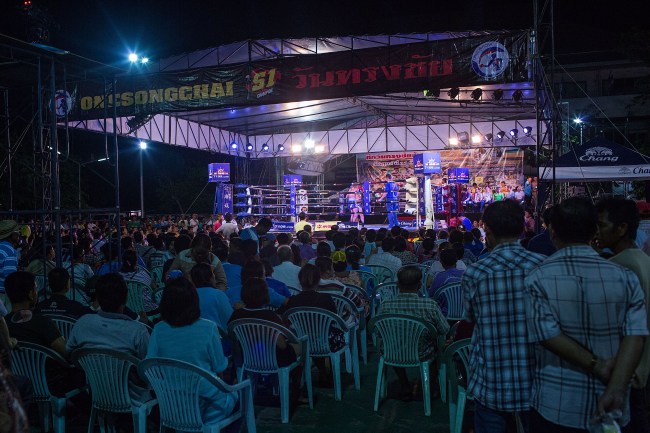 According to Muy Thai Scholar, a fighter competing in the Phuket stadium of Thailand earns about 6,000-7,000 baht per fight, which equates to $185-$215 dollars a contest. Of course this varies depending on whether or not you get the fight through your gym, the show you’re fighting on, and the level of fighter you are, but the point remains, there are easier ways to make that kind of money than fracturing your skull.

And that brings me to this French Muay Thai boxer named Jeremy who competed at the Patong Stadium in Thailand on Monday and suffered a nasty looking injury. Jeremy’s opponent landed a flush elbow to his forehead, fracturing it. And it shows.

Jonny Betts, who trains in the same gym as Jeremy in Thailand, told SPORTbible that the injury didn’t stop Jeremy from continuing the fight.

“He was fine, though. He wasn’t wobbled and kept fighting, but the referee stopped the fight to get a doctor to look at the injury and the doctor obviously stopped it right away.”

Jeremy’s surgery was successful, as he had a titanium plate fitted in his skull where the bone had collapsed, and he is now out of hospital.

Jeremy’s injury is reminiscent of the gruesome knee hit Evangelista Santos took at Bellator 158, an injury Joe Rogan described as “the worst MMA injury” he’d ever seen. Santos had to have reconstructive surgery on his forehead and will have a gnarly titanium plate in his skull for all of eternity.