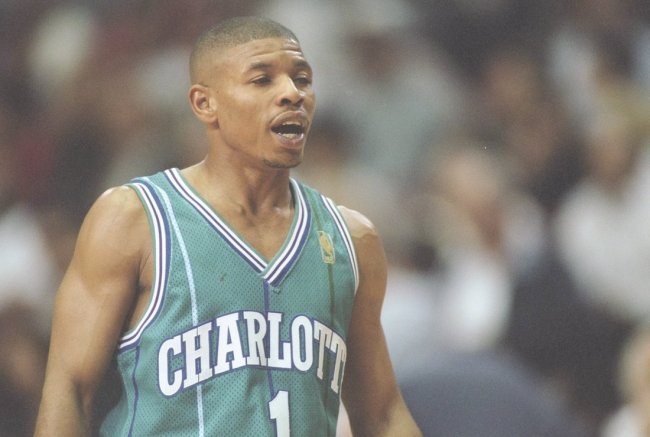 Former NBA player Muggsy Bogues is best-known for being the smallest player in league history, as the pint-sized guard stood just 5’3″. That didn’t stop him from becoming the 12th overall pick in the 1987 NBA Draft, nor did it prevent him from enjoying a 14-year career that saw him average 7.7 points and 7.6 assists per game. Sure, those aren’t All-Star-like numbers, but, c’mon, the dude was a full foot shorter than most of his peers playing the same position.

Given Bogues’ small stature, there are plenty of stories about other NBA players giving him crap to try and throw him off his game. While Muggsy surely experienced that type of stuff nearly every single time he took the court, there’s one story that particularly stands out, with the GOAT, Michael Jordan, reportedly calling Muggsy Bogues a “midget” during a 1995 playoff game, daring the guard to shoot the ball.

As the story goes, Bogues took the challenge from MJ, shot (and missed) and, from that point on, he was never the same player — even reportedly proclaiming so to a former Bulls announcer. Could Michael Jordan trash-talk be so lethal, though? According to Bogues, the story of such an insult ruining his career are greatly exaggerated.

Talking about the MJ story on his 3 League OGs podcast, Muggsy gave his side of the story.

“That supposedly had an effect on the rest of my career? That’s one of the craziest, asinine stories that you can hear,” Bogues said on his 3 League OGs podcast. “Think about all the stuff that I’ve been hearing all my life. And here it is, I’m what, 10 years in my career already? And somebody says something, and it’s going to affect my career? That don’t make no sense.”

He continued: “What really happened was that my knee; they looked at some of my numbers after the series, and I started having surgery on my knee, and I had to stop playing. And when I missed a year, and then I came back, my numbers had went down. I guess they felt my role had changed. I started coming off the bench for certain teams. … So, they try to combine them and make it seem like, well, that had some effect on my career.”

I heard trash talk all the time in the NBA, that was and still is a big part of the game. The rumor that MJ ruined my career with an insult is simply not true. We were competitors, we threw around insults during games but it was never personal. @3LeagueOGsPod link in bio. pic.twitter.com/dthnn1mv2w

So, obviously, Muggsy Bogues shoots down the claims the Jordan ended his career with a simple insult, instead blaming chronic knee injuries for the steep decline. While that’s probably the truth, it doesn’t exactly fit what most NBA fans want to hear, with many putting MJ in the category of bully given some of the legendary stories with opponents and even his own teammates. The Bogues rumor only adds to the six-time champ’s legacy.

However, according to one of the men who lived through the experience, it sounds like the thought that Michael Jordan’s trash-talk ended Bogues is nothing more than an old wives’ tale we all want to believe as truth.