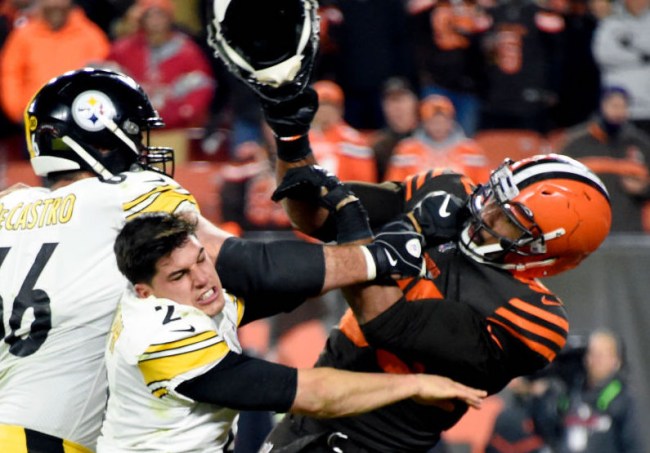 It doesn’t seem like much of a stretch to assume a sizeable chunk of viewers who tuned into November’s Thursday Night Football game between the Steelers and the Browns had turned their attention to a rerun of House Hunters or some other form of alternate programming before the contest came to a close, as Cleveland had a pretty commanding lead by the time the end of the fourth quarter rolled around.

The Steelers ended up with possession of the ball in the waning seconds with literally no shot at winning, and while they could have simply called a run to allow the clock to officially wind down, they opted to put the ball in the hands of Mason Rudolph one final time only to see all hell break loose courtesy of Myles Garrett.

Rudolph didn’t take too kindly to being thrown to the ground by the defensive end on an entirely meaningless play and the two ended up getting into it before tensions boiled over to a point where Garrett ripped off the quarterback’s helmet and began to swing it wildly at his head before summarily getting pummeled by the Steelers who came to their teammate’s rescue.

Myles Garrett swings helmet then gets stomped on by the Steelers wow pic.twitter.com/kDl8ThEe67

A closer look at the play showed Rudolph may have caused things to escalate by kicking Garrett in the balls—an act that is traditionally frowned upon—and the NFL ultimately fined him $50,000 for his role in the fracas.

However, that paled in comparison to the punishment Garrett faced for trying to decapitate a dude with his own helmet, as he was hit with an indefinite suspension and lost out on the $1.85 million he was due over the course of the rest of the season.

Garrett eventually appealed the suspension, and during his meeting with the league, he accused Rudolph of hurling a racial slur at him prior to the brawl (which came as a surprise to other Browns who said their teammate failed to mention that aspect of the altercation). Rudolph swiftly denied those claims, and after conducting an investigation, the NFL found no evidence to support them.

After meeting with the league again earlier this week, Garrett was officially cleared to play next season and we can thankfully put this whole incident behind us as the saga finally comes to a close.

On Thursday night, SportsCenter aired an interview with Garrett in which he doubled down on his claim and maintained Rudolph called him “a stupid n-word” during the contest.

Here’s the video of @minakimes with Myles Garrett saying that Mason Rudolph used language that went too far #Browns pic.twitter.com/7uhTmJDNzL

Garrett also said he was curious why the NFL was unable to obtain any audio and seemed to imply there may be proof the league hasn’t made public.

Listen to this audio from Myles Garrett with @minakimes. This isn’t even subtle, Myles is as baffled as everyone that the NFL claims there’s no audio and is calling them out 👏🏻👏🏻👏🏻#Browns pic.twitter.com/MQmwdKmrPM

The Steelers will take on the Browns on two (as-of-yet undetermined) dates next season, but with Ben Roethlisberger slated to make his return after succumbing to the elbow injury that resulted in Rudolph starting the majority of last year, it doesn’t seem like we’re going to be treated to the showdown more than a few people would love to see.