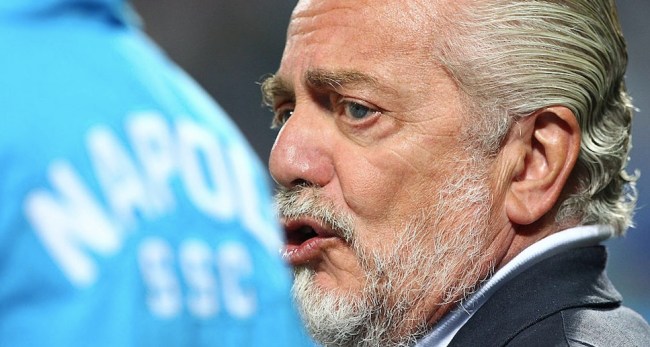 Aurelio De Laurentiis, the owner of the iconic club Napoli in Serie A, has virtually outed himself as a racist as he said the team will no longer be signing African players who wish to compete in the Africa Cup of Nations (AFCON).

The AFCON is effectively Africa’s version of the Euros and is the continent’s most prestigious international tournament. De Laurentiis claiming that he will no longer sign African players who wish to play in AFCON is the equivalent of him saying he’ll no longer sign Germans or Italians who wish to play in the European Championships. Given this, the reaction across the soccer world has been one of disgust.

“I told them lads, don’t talk to me about Africans anymore,” De Laurentiis said, according to the Daily Mail.

“I love them, but either they sign something confirming they’ll back out of playing the Africa Cup of Nations, or otherwise between that tournament, the World Cup qualifiers in South America, these players are never available.”

“Or they sign a waiver giving up their right to participate to the Africa Cup of Nations tournaments or between AFCON and the championships in South America … I never have them [Napoli players] available,” De Laurentiis said in a Wall Street Italia talk show.

De Laurentiis’ comments come almost immediately after Senegal defender Kalidou Koulibaly, who spent eight seasons in Napoli, departed for Chelsea in the Premier League. Koulibaly left Napoli for a few weeks to play for Senegal during AFCON earlier this year. Senegal would go on to win the tournament.

In response to De Laurentiis’ comments, Koulibaly said “the most important thing is to respect everyone.”

“When I played there I also played for Senegal… You cannot speak of an African team like this. You have to have respect like you have for a European team. I respect what he thinks, it’s up to him but I think not everybody has that same idea at Napoli.”

While Napoli has struggled to achieve domestic or international success in recent years, the club remains one of the most iconic in world football, largely thanks to the fact that the legendary Diego Maradona called Naples home from 1984 to 1991.