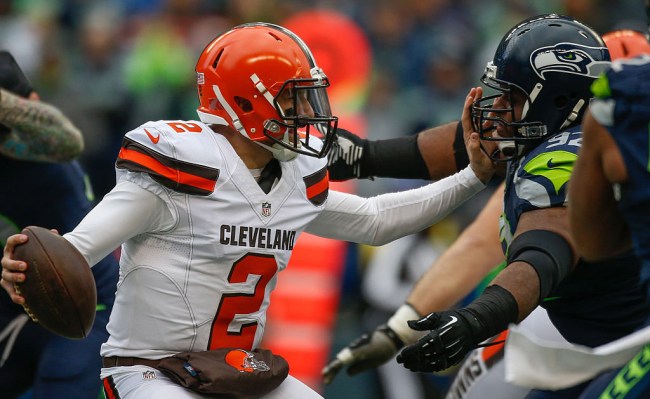 Here’s a shocker. Johnny Manziel, according to his teammate on the Cleveland Browns back in 2014, Nate Burleson, showed a horrible work ethic almost immediately after being drafted.

Appearing on “The Ken Carmen Show with Anthony Lima” Burleson, who will be joining NFL on CBS for the 2017 NFL season, had this to say about Manziel’s rookie year (as transcribed by 247 Sports)…

“I saw somewhat of a lack of dedication. I saw a guy that would rush out of the facility to go enjoy the fruits of his labor and the friendships that he had. I would see a guy coming in that did not study the playbook as much as he should and struggle in the classroom and then adversely struggle on the field. That was one thing that I quickly realized, when I first got there, they handed out iPads. It’s the new generation so I studied on the iPad but I also asked the coach for the paper playbook.”

“I heard that Johnny wasn’t opening up his iPad on the weekend because everything is tracked. You log in and coaches know when you are looking at your iPad. I knew then that the dedication wasn’t there. Was I disappointed? Definitely.”

“There were certain things that he did at practice that dropped jaws. If he was talented enough and had the IQ to dedicate himself to the classroom and on the field, he could’ve been special in this league,” he continued.

“I remember saying if he can do what Russell Wilson does in the classroom and not enjoy the streets to the point that you are not exhausted, he will be just as good as Russell Wilson which is crazy to say…If he had dedicated himself to the classroom, his skill set, huge hands, can avoid the pocket, can negotiate with his feet, could throw any ball from any angle: cross body, sidearm, over the top. He could’ve been just as good.

Has that time passed? Maybe. I’m not sure exactly where his motivation is.”

Burleson wasn’t ready to totally bury Manziel though, who is still only 24-years-old.

“Not to give him a pass…Not to say anything that he was doing to give him a pass. When you’re Johnny Manziel – Heisman winner, Heisman finalist, super star, couldn’t go to class because the fanfare was so crazy on campus. Not to mention, you get in the NFL, you’re friends with Drake, you’re friends with LeBron, every superstar. Then, on the weekend, you have the decision to stay and study the playbook in a small hotel room or dip out and sit your feet court side at a playoff game. I’m not sure if I could tell a 22, 21, 23-year old that you’re making the wrong decision.”

That sounds a whole lot what Pro Bowl teammate Joe Thomas had to say about Johnny Football in another recent interview.

Now I don’t know if all this show that JFF has been putting on, working out with OBJ, working with a QB coach, and re-hiring his agent, means he’s really trying to come back, but if he does, (1) he’s going to have to do something about that dad bod he’s sporting, and (2) bro is going to have to learn how to study.

Then again, Johnny has been back in college trying to finish his degree so studying shouldn’t be a big problem for him now, right?