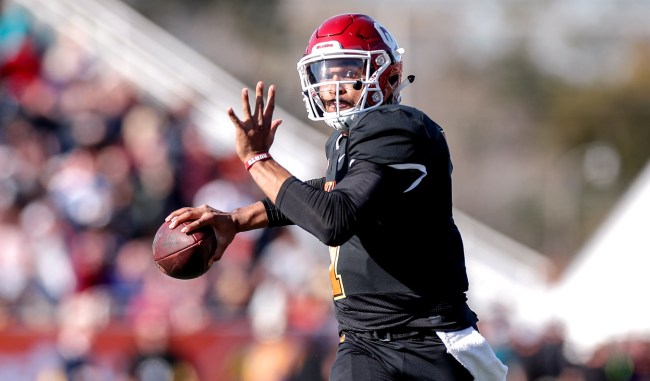 Then again, most NFL fans didn’t see the Eagles drafting Jalen Hurts in the first place since, you know, they already have Wentz signed to an eye-watering 4-year, $128 MILLION contract.

And they also probably didn’t see the Eagles drafting Jalen Hurts in the second round and then turning around and having the team’s general manager Howie Roseman intimate that Hurts might get on the field as “a straight running back.”

So news that Pederson envisions Nate Sudfeld to remain the Eagles’ backup quarterback shouldn’t really come as a surprise. But it does.

“I fully expect Nate to come in and be aggressive and do the things that he’s capable of doing, and become the backup to Carson,” Pederson told the media on Tuesday. “And then with Jalen, Jalen is about, right now, just learning and picking up our system, and he’s another one, another young player that we drafted who, there’s a lot to learn from the quarterback position.

“So, are we going to take it a little bit slower maybe with him until he grasps the offense? You might have to. What I like about it is always the unknown, and the unknown is how well a guy I think can progress. And then once we get him on the grass, put him through drills, put him through practices, then we see exactly what these guys are all about.”

“Having played in this league for so long and seeing this pandemic and thinking back to when we came out of the lockout year, I think early on in this season, this becomes a veteran-laden football season,” Pederson added. “Football teams are going to have to rely on their veteran players, and Nate is one of those guys for us. He’s been on our roster the last couple of seasons and he knows exactly what we are doing. I have a ton of confidence in Nate to become the backup quarterback.”

For what it’s worth, the 26-year-old Sudfeld, a sixth round pick in 2016 by the Washington Redskins out of the University of Indiana, has thrown a total of 25 passes in his three NFL seasons (two since 2017), completing 80 percent of them, for 156 yards and one TD.

“Everyone kind of makes it dramatic or a big deal,” Sudfeld said recently on the Eagles Insider Podcast. “But once you’re kind of in that quarterback room, it’s a lot of helping each other out and everyone just getting better. It’s never really weird at all.”

“I’m just looking forward to when all this stuff dies down with the COVID and I can just get back to work,” he added. “Because I’m excited about the guy we got. I think Jalen is an incredible teammate and player, and I think he’s going to have a great, long career.”