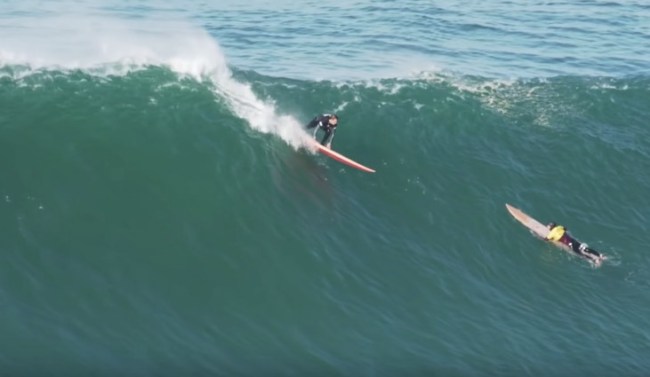 Big Wave surfers are some of the craziest athletes on the planet. Even among the subset of Extreme Sports, paddling into waves that are four stories tall is one of the most dangerous ways to get your thrills.

During the late Fall and early Winter months, the tiny fishing village of Nazaré, Portugal has become a worldwide destination for Big Wave surfers. When the swells set up right, Nazaré is home to the largest waves on the planet. This isn’t hyperbole, the world record for the largest wave ever surfed was set at Nazaré by Brazilian surfer Rodrigo Koxa.

The WSL’s Big Wave Surfing tour held their annual surfing competition at Nazaré a few weeks ago during the peak season and it led to some truly gnarly wipeouts. Steve Cummings, aka JacuzziSurfer on YouTube, traveled to Nazaré to document the most brutal wipeouts from the past few weeks and holy hell did these surfers take a beating.

Steve Cummings, the dude who made this video, describes crashing on these waves as jumping off a 4-story building into a pool and landing flat on your face. Let’s check out the carnage:

If you want to see a full cut from one of Nazaré’s most notable wipeouts this year you can check out this dude getting eaten alive by a 60-foot wave.

I’m guessing you’re interested in Big Wave Surfing since you clicked this article, and if that’s the case then you 100% need to check out surfer Bradley Norris talking about being moments from death as he was held under for three giant waves. (h/t The Inertia)