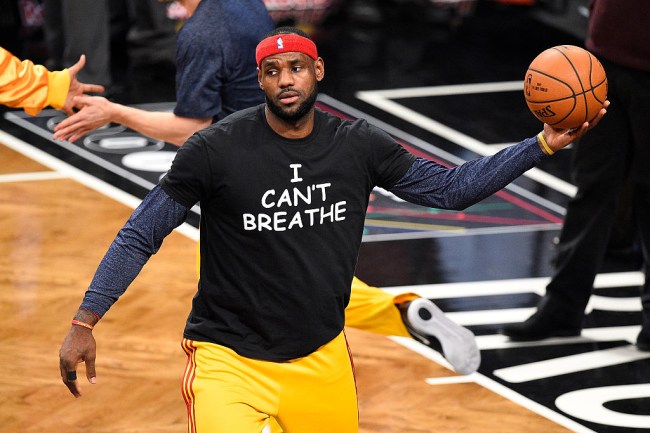 The O.G. version of the XFL introduced a number of changes to both the game of football and the way that it’s covered, and while the league didn’t stick around for long, some of the innovations it introduced (especially in that second realm) had infinite more staying power, as the Skycam and in-game interviews would eventually become staples of NFL broadcasts.

It may have failed to catch on but there was arguably one novelty that was more memorable than any of the others: allowing players to put basically anything they wanted on the spot of the back of their jersey normally reserved for last names. A couple of teams banned the practice but other players around the team took advantage of the opportunity, none of whom gained more notoriety than Rod Smart, who you likely know better as “He Hate Me.”

Now, almost 20 years later, another league may be adopting that practice, as ESPN reports the NBA Players Association is currently in talks with the league to allow guys to throw custom messages on their jersey—just don’t expect to see monikers like “ChronicY2K1” and “Big Daddy” emblazoned on the back.

The NBA is probably wishing it could get a redo on the location it picked to resume the season based on how things are currently looking in Florida but that’s not the only sizeable hurdle it’s faced while trying to restart. Earlier this month, a number of players revealed they were having second thoughts about pulling a Jake Gyllenhal and confining themselves to a bubble in the light of the protests that were raging across the country in response to multiple high-profile displays of police brutality.

Adam Silver quickly jumped into action to address the concerns that were raised and pledged the league would make a concerted effort to aid in the push to confront injustice and inequality, and over the weekend, Chris Paul revealed a plan to allow players to replace their names with phrases to call attention to social issues of their choice.

Paul floated options such as “Black Lives Matter” and “I Can’t Breathe” and also suggested last names could be replaced with those of victims of police brutality like George Floyd and Breonna Taylor, allowing players who won’t be able to partake in protests to still “say” the names frequently invoked at those public demonstrations:

“I was just thinking about how forward-thinking our league is and how passionate the players in our league are about different issues. Our guys have been marching on the front lines and using their platforms. If guys are choosing to come down to Orlando to make sacrifices and play this game, why not be able to play and still say his or her name at the same time?”

Ja Morant caught a biiiiiit of heat after suggesting he could pair “Fuck” with the number 12 to make his feelings about the police known (he later clarified the statement was directed at “bad” cops) while Spencer Dinwiddie seems to be taking a slightly different approach by opting to call attention to America’s ever-escalating national debt.

A lot of issues at the moment. I think the fact that the country is 26 (ironically) Trillion dollars in debt is high on the list

I’m sure more than a few people out there will find some reason to bitch about these, but even though it’s a pretty small gesture, it’ll be pretty hard for it to hurt more than it helps.