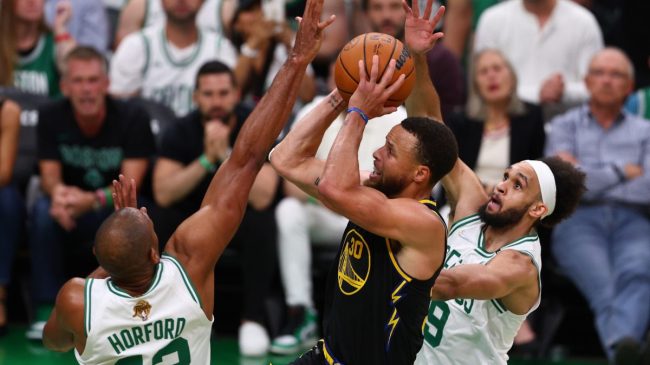 Steph Curry is having himself a series in the NBA Finals.

The sharpshooter leads all scorers with an average of 34.3 points per game through the first four contests. His latest 43-point performance helped Golden State even the series at two games apiece as the Warriors stole a win in Boston.

With the impressive scoring output thus far, it’s no surprise to see him with the best MVP odds of anyone on either team. It’s also brought about an interesting question regarding the Finals MVP honor.

Many believe that the outcome of the series shouldn’t matter.

They say that even if Golden State winds up dropping the series, Curry should win the award for his play. He’s had the biggest impact on the series, helping carry a Warriors team that some are saying is still a player or two short of winning a title.

Typically, the MVP comes from the team that ends up winning the championship, but in the case of Steph Curry, a point could be made that he’s the most deserving.

Fans have taken the argument to social media as they debate Curry’s chances of being named Most Valuable Player.

Many NBA followers believe that Curry is the MVP no matter the outcome of the series. He’s been the best player on the court, and it should be reflected even if Golden State can’t bring home a championship.

I believe that Steph Curry should win Finals MVP regardless of the outcome! He has been the BEST player in the series and it’s not even close. The man is averaging 35!!!! Don’t mind me and Carry the hell on…

“Steph Curry should be the NBA Finals MVP win or lose. He’s been that much better than everyone else.” – @johnhollinger pic.twitter.com/I3DUCwETD8

Let's not hear anymore garbage about "Steph Curry hasn't been a Finals MVP." He's easily been the best player in this series, win or lose.

Apparently, Vegas agrees. Curry’s MVP odds are higher than the Warriors’ odds of winning the title.

Steph will try to avoid the debate by helping his Warriors win a championship, while bringing home the Finals MVP in the process. If Boston does win, though, he should certainly still be in the conversation.