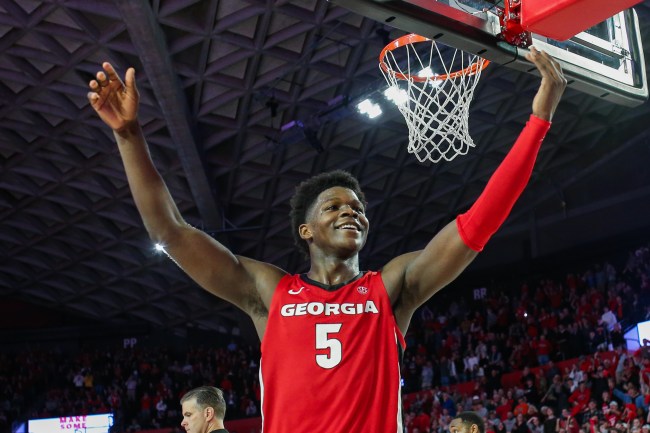 After months of speculation surrounding the top prospect in the 2020 NBA Draft, the Minnesota Timberwolves selected Anthony Edwards No. 1 overall. It has been a unique year for talent evaluation, as workouts, combines and the typical pre-draft assessment process was cancelled due to COVID-19, but it seems like 2019-2020’s lottery winner has found its future.

Edwards, a 6-foot-5 combo guard from the University of Georgia, averaged 19.1 points on 40 percent shooting in his only season in Athens, and added 5.2 rebounds and 2.8 assists. As something of a physical freak, he combines next-level size, strength and twitch with an on-court maturity well beyond his years to dominate opponents. At all of 225 pounds, he is surprisingly light on his feet and explosive jumper off of two feet, which makes him an absolute nightmare for defenses when he’s driving to the rack in a half-court setup or running the floor in transition.

Dwyane Wade talking about Anthony Edwards: "He can be better (than me). America here is your number 1 pick!" pic.twitter.com/6jpY0QWhik

No seriously, if he is slashing through the lane, it’s a better business decision to simply get out of the way.

Remember when Anthony Edwards did this to Vanderbilt?! 😵☠️ #NBADraft pic.twitter.com/BaFv0oACcF

Minnesota’s newest guard has outstanding body control that will translate to immediate success on the next level and if he doesn’t finish above the rim, he drew fouls at a solid clip in college. He averaged over five free throw attempts per game and made 77 percent of them. Edwards has the foundation to develop into a top-tier scorer and also has a smooth jumper with NBA range in his arsenal.

The Timberwolves were abysmal last season and finished 19-45 with very few positive takeaways beyond Karl-Anthony Towns and getting out of Andrew Wiggins’ horrendous contract at the trade deadline. In addition to trading the former No. 1 overall pick for D’Angelo Russell in February, Minnesota added a couple of complementary shooters in Juancho Hernangomez and Malik Beasley to provide depth alongside 2019 first-round pick Jarrett Culver. The offense is going to rely heavily on the pick-and-roll between Russell and Towns, with the objective being to shoot as many triples as possible. Edwards provides explosive talent to the lineup and will surely be in the mix to crack the starting five right away.