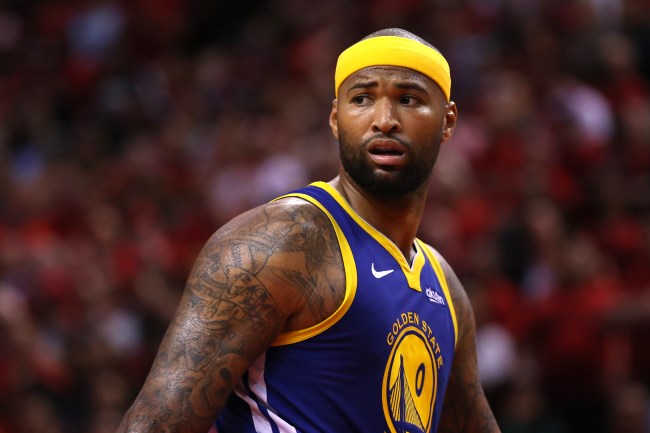 The NBA Finals have been quite the fight so far, with the Golden State Warriors and Toronto Raptors currently tied 1-1 as they battle for the Larry O’Brien Trophy — and a nice big bonus check for the winners. But, for anyone whose watched either of the games so far, one thing has probably stood out: how banged up the Warriors are right now, with guys like DeMarcus Cousins, Andre Iguodala and Klay Thompson fighting injuries, while Kevin Durant has been out for the past three weeks with a calf injury. It’s incredible how the Dubs have been able to maintain their level of play with so many dudes hurt.

While nobody’s feeling sorry for a team that’s won three of the past four NBA Finals — with most of America already rooting against Golden State this series — at least some members of the team are having fun with the whole thing. That’s what DeMarcus Cousins did on Instagram following the Game 2 victory in Toronto, with the big man posting an A+ image of both he and Iguodala being wheelchaired through the airport. Take a look below.

Boogie and Iggy got jokes 🤣 pic.twitter.com/MAA3lTggqZ

OK, so this might be a little bit extreme — because both Cousins and Iguodala played huge roles in having the Warriors steal Game 2 — but it perfectly sums up just how many players on the team are battling injuries. The good news for the team? They’ve got until Wednesday till the NBA Finals picks back up, meaning they have a few days to recover.

Injuries in sports happen, and, unfortunately, there’s no explaining why they occur when they do — especially during a championship game or round. And, while most of us probably hope the Warriors don’t win their fourth title in five years, it’s kind of refreshing to see them make light of the situation and not make excuses or do the whole “whoa is me” thing. Let’s see if that continues if they end up losing the NBA Finals, though, because so many of their key guys are injured right now.