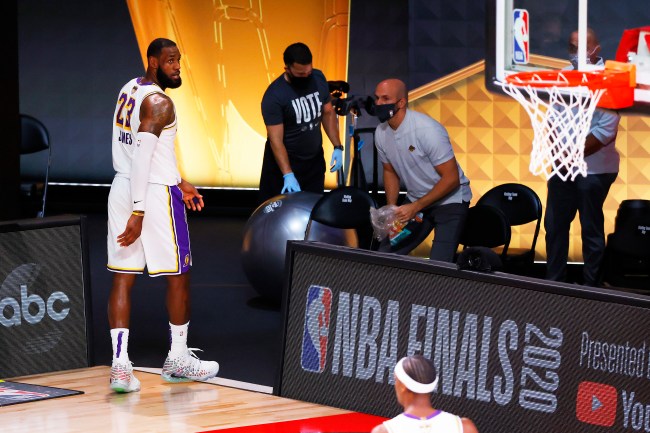 The NBA continues to take massive hits in the rating department as the league suffered another night of horrendous viewership during Game 3 of the NBA Finals on Sunday.

After the ratings for Game 1 were the worst of any Finals game all-time with an average of 7.41 million viewers it didn’t seem like that number could get any worse for the remaining games in the series, but it did.

Two days later, Game 2 took the crown as the least-watched Finals game ever as the ratings absolutely plummeted with an average of just 4.5 million viewers, according to Outkick. An almost three million viewer drop between Game 1 and 2 is almost unbelievable, but the ratings fell again on Sunday for Game 3. The third game of the series, in which the Heat beat the Lakers 115-104, averaged only 4.395 million viewers at its highest point of the night, according to ShowBuzz Daily.

To say the viewership numbers are bad for these NBA Finals is a drastic understatement. Nobody is watching these games despite the fact they involve LeBron James and the Lakers.

For comparison, the NFL game between both the banged-up 49ers and wide receiver-less Eagles on Sunday night averaged over 12.4 million viewers at its highest point. That’s 8 million more people watching a regular-season NFL game than Game 3 of the NBA Finals.

With the NBA surely panicking with these ratings, we still have at least two more games to be played in the series. It will be interesting to see if the numbers for Game 4 on Tuesday night set another record-low and if they do, without any NFL games to compete with, it further proves the point that a massive number of people have completely tuned out of the NBA.

Whether it be due to political beliefs, social justice messages, the lack of fans inside the bubble, or any other reason, numbers don’t lie and these numbers are showing that an extremely small number of NBA fans outside of Los Angeles and Miami are tuning in for these games.