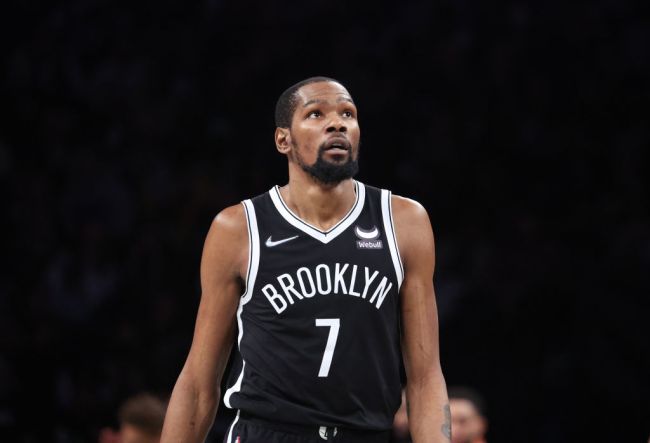 All eyes in the basketball world are currently on the Brooklyn Nets. Kevin Durant and Kyrie Irving have both requested trades and now fans are just waiting deals the Nets can land for these two stars.

It turns out it could be a long wait. The Athletic’s Shams Charania revealed today that the Nets are willing to wait until they get the price they are looking for.

"The Nets aren't gonna move Kevin Durant until their price is met.. this process could take a while" ~@ShamsCharania#PMSLive pic.twitter.com/AJOL6Wq5pY

It’s not all that surprising that trading Kevin Durant could take a while for the Nets. They are looking for a trade package that not many teams can offer. Charania’s observation about the moves they’ve been making this offseason is much more surprising.

Charania pointed out that the Nets are making moves as if they are going to have Durant and Irving back next season.

The trade for Royce O’Neal and signing TJ Warren definitely aren’t moves that make a ton of sense on the surface if the Nets truly believe they are headed for a rebuild.

However, these moves don’t necessarily mean the Nets will actually be able to hold on to Durant despite his trade request. Instead, they may be trying to prepare themselves for the possibility that they won’t be able to trade Kyrie Irving.

There was seemingly no interest in him from around the league when he the Nets were considering a sign-and-trade and Charania said in this same appearance that the rumored deal to send Kyrie to the Lakers doesn’t actually have any traction.

Whatever ends up happening with these two stars, the Nets’ moves are certainly going to be interesting to watch throughout this offseason.