WTF Can We Actually Believe Right Now When It Comes To The NBA Season? 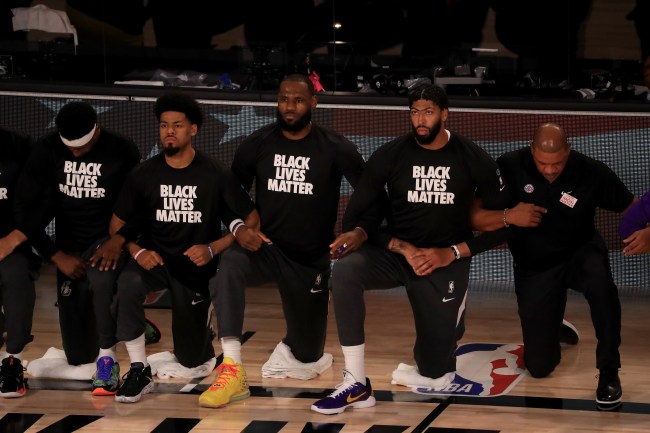 The NBA season might be on life support at the moment, guys, with the remaining playoff teams protesting games on Wednesday and (reportedly) Thursday as well, leaving everyone wondering what in the hell is going to happen with the rest of the postseason. Remember, it was just about a month ago that 22 of the league’s teams returned to a safe NBA bubble to resume the previously suspended season due to the coronavirus, so nobody could’ve foreseen any of this coming.

Had the NBA season reached a brink of no return, many probably assumed it would happen from a player compromising his healthy by leaving the bubble — which we saw a few players do, get caught, and then have to quarantine while getting tested (seemingly) nonstop. But for the games to stop because of something outside of this safe space wasn’t part of the plan. But, in a historic (and necessary) move, the players united and used their platform to bring attention to the incidents happening all around the country right now.

But here’s the question that every sports fan is asking themselves right now about the NBA season: WTF can we actually believe?

In normal times, which is one word nobody would use to describe the year 2020, reporters would have direct access to players and coaches and league officials. But, inside an isolated bubble with limited access, no one knows for sure what’s going on, which means we’re all left with conflicting reports about what comes next.

We first heard from Brad Turner of the Los Angeles Times (who’s the Lakers insider), that, in the players-only meeting Wednesday night, both Kawhi Leonard and LeBron James voted to cancel the rest of the NBA season, per his sources. Then we heard from Vincent Goodwill of Yahoo! Sports that his sources said James initially stated that he’d go with the consensus; then stormed out of the room. But, again, who are their sources unless it’s the players themselves? Even then, is it the truth?

Sources: Lakers forward LeBron James and Clippers forward Kawhi Leonard both spoke up in the players meeting Wednesday night and were adamant about not playing the rest of the playoffs and they wanted change. The players will have another meeting at 11 am East time Thursday.

Sources to @YahooSports: There was frustration with Milwaukee players for doing this without talking to others. LeBron James initially stated he would go with the consensus, then got angry and stormed out.

Following that report, we abruptly heard from Portland Trail Blazers star Damian Lillard, who immediately questioned the chatter about James and Leonard being adamant about canceling the rest of the season. Dame, whose Blazers team is still in the postseason, actually called B.S. on the update, wondering where reporters are getting their info.

So, wait, is the NBA season going to be cancelled, or is it going to be played? Do we believe the insider, or do we believe the player who is, you know, in the room where he and his colleagues are discussing what to do next? Honestly, nobody even knows the answer at this point.

Then we got a reported update from Jeff Goodman, who cited quotes from an anonymous NBA player about what went on in the meeting itself when everyone came together. Goodman’s source did say things got heated and were emotional — which is to be expected given the situation — but that no conclusion was made about what’s next.

One NBA player to me following the meeting: “It was emotional. Heated. It doesn’t look good right now, but we’re all hoping that everyone will sleep on it and maybe we can figure it out tomorrow because most of us still want to find a way to play.”

About 24 hours prior to the Milwaukee Bucks protesting their game against the Orlando Magic, there were whispers that some players had grown tired of being isolated inside a bubble and playing a sport that’s just distracting everyone from the issues happening around the country, and that they were considering protesting. While nobody believed that there would actually be a protest — call it ignorance, I suppose — it happened, so here we are.

The Clippers and Lakers voting on perhaps not continuing with the season was considered more of a polling, than a final vote, sources tell ESPN. The resumption of the playoffs remains still up in the air.

Conversations have been ongoing throughout the morning among owners, league executives, coaches and players about how the league can restart these playoffs, sources tell ESPN. The players and Board of Governors have separate meetings set to start now.

Everyone — from team owners, league executives, coaches and players — are meeting at this very moment to decide what comes next for the NBA season. So, until we have a definitive statement from Commissioner Adam Silver about what comes next, it’s probably best to ignore the sources and Twitter reports; because nobody knows a damn thing about what’s next for the league.