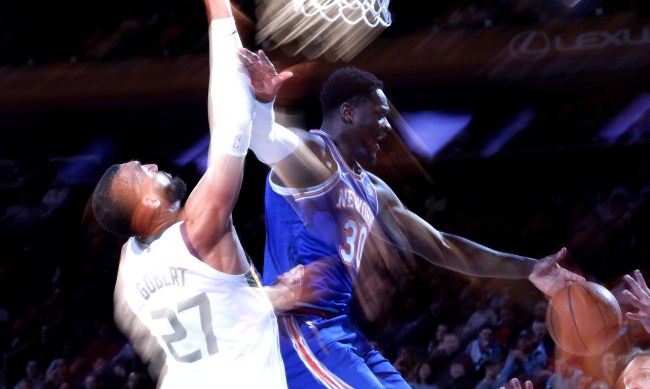 The shocking news that the NBA has postponed all games following the news that Utah Jazz center Rudy Gobert tested positive for coronavirus has sent shockwaves throughout the sporting world.

The NBA G League also announced in a statement that it too has suspended the rest of their 2019-20 season until further notice.

ESPN’s Ramona Shelburne reports that the NBA will hold a call with the board of governors at 12:30 p.m. ET on Thursday to discuss what the league’s next move will be going forward.

The latest reports state that the Utah Jazz players and staff were told to remain in the Chesapeake Energy Arena in Oklahoma City overnight.

“A preliminary positive result came back right before tip-off of the Utah Jazz-Oklahoma City game,” Jazz management wrote in a statement. “Subsequently, the decision was correctly made by the NBA to postpone the game. When it was determined that the individual would be tested, we immediately informed the league office. The health and safety of our players, our organization, those throughout our league, and all those potentially impacted by this situation are paramount in our discussions.

“We are working closely with the CDC, Oklahoma and Utah state officials and the NBA to determine how to best move forward as we gather more information. The individual is currently in the care of health officials in Oklahoma City. In coordination with the NBA and state officials, we will provide updates at the appropriate time.”

Over the past 10 days, the Jazz have played games against numerous teams, including the Cleveland Cavaliers, New York Knicks, Boston Celtics, Detroit Pistons and Toronto Raptors. ESPN’s Brian Windhorst reports that all five of those teams have been told to self-quarantine, and the Raptors will be self-quarantined for at least 14 days reports Shams Charania of The Athletic.

Sources: The Raptors have informed their players to self-quarantine for the next 14 days due to coronavirus situation. Toronto faced Utah and Rudy Gobert on Monday.

The graphic below shows how just by playing two games in the past five days Jazz players may have infected all 30 teams in the league.

All 30 NBA teams can be connected in just the last 5 days.

The NBA made the right decision to suspend this season. pic.twitter.com/jUy3X5zwTj

“I’m sure I probably had contact with [Gobert]. But at the same time, like I said, [I’m] just taking precautions,” Detroit Pistons guard Langston Galloway told ESPN. “We’ve been washing our hands, and when the reports started coming out, everybody’s kinda been on their hand sanitizer, washing their hands, just staying focused on that moment of, hey, [we have] interaction with a lot of different people and knowing that at the end of the day, you might’ve touched the ball, you might’ve interacted with a fan, and just being [cautious] with that going forward.”

2020 aint it. Don't know what to compare this situation to…just gotta buckle up and take care of yourself and those around you. Basketball will be back at some point but right now, protect yourself and stay safe out there!