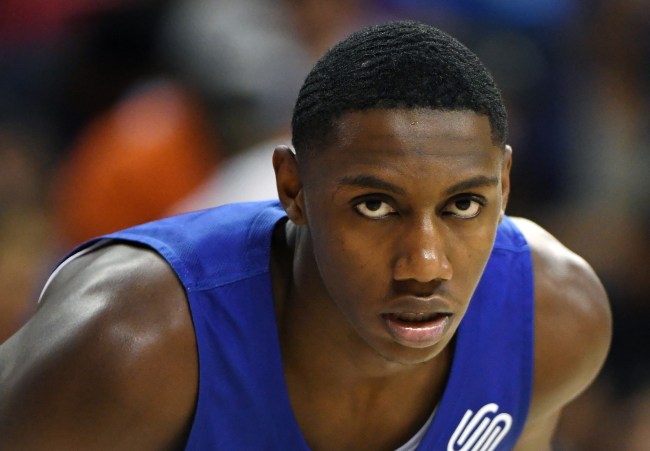 No other fanbases in professional sports overreact to trivial things and non-stories like NBA fans. There is no subject that hasn’t been speculated on to the point of parody. No free agency rumor that hasn’t been considered. No team jersey that hasn’t been photoshopped on a free agent for social media clout. NBA fans are like insecure, jealous boyfriends speculating on the future relationship over an Instagram like. Which is why it’s the best league in the world.

Today we’re going to completely overanalyze the two underwhelming summer league games of number 3 overall pick R.J. Barrett. I know what you’re thinking: “But it’s only two games and the summer league has virtually zero correlation to future success.” Don’t confuse me with facts, young man!! This is about DRAMA.

Through two games this season, the 19-year-old is 7 for 33 from the field, with 10 turnovers and two assists in two games.

His last game was particularly bad:

Barrett will be fine. And in all likelihood, we’ll be able to look back and laugh about these dismal performances. But why wait until he succeeds to have ourselves a good hearty chuckle?

Knicks fans tryna convince themselves RJ Barrett is the next big thing after losing out on KD, Kyrie, and Zion pic.twitter.com/GDyW5NNwsQ

Let’s just say my concerns about RJ Barrett coming in (lack of explosiveness, shot form and tendency to force things) have not exactly been alleviated.

Both of these statements are true:

– RJ Barrett is 19, hasn’t played a game since March and a good amount of rust, growing pains should be expected.

How Knicks fans are looking at RJ Barrett. 😂 #SummerLeague pic.twitter.com/2dVjE0P9FS