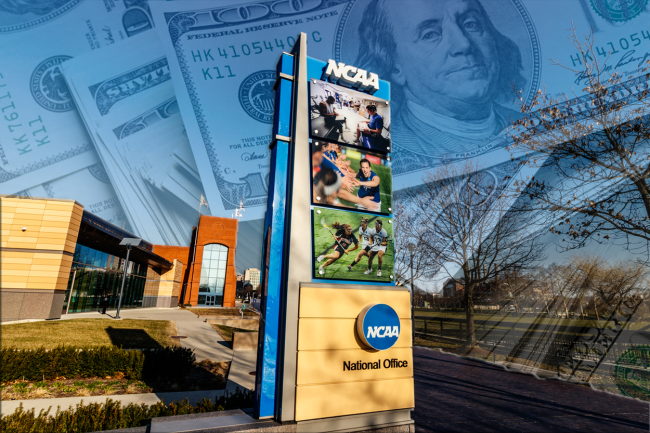 According to Ross Dellenger of Sports Illustrated, the Division I Board of Directors approved new guidelines on Monday. They clarify existing bylaws that prohibit boosters from being involved in recruiting.

College football boosters seeing that the NCAA is going to “crackdown” on NIL 💰pic.twitter.com/EA6aPuW2TV

Ultimately, the goal is to “crackdown” on potential instances of recruits and transfers being paid “above the table” through NIL in exchange for their commitment.

“The guidance’s primary purpose is eliminating a booster’s involvement in recruiting, members of an NCAA NIL working group said last week. Officials say boosters and booster-led collectives are using NIL-disguised transactions to induce prospects to sign with their school or convince current players to remain on their school’s roster.”

Not only are the guidelines for the present, they are also retroactive. Despite the fact that they are implementing the new guidelines 10 months after NIL was introduced, they are retroactive. The NCAA enforcement staff is given the green light to investigate programs and boosters who “egregiously violated bylaws” in the past.

NCAA Enforcement has been given the freedom to independently review prior NIL deals, the guidance says.

According to Dellenger, any single booster or booster-led collective could have violated NCAA rules, which puts the booster’s school at risk of sanctions. Specifically, a violation would have occurred if a booster or collective is “found to have associated with a prospect about recruiting—on another college team or in high school.”

Now, the question is whether the NCAA will enforce the new guidelines on NIL.

Should the NCAA decide to “crackdown” it raises two big issues.

First and foremost, the NCAA may not have enough people to do so. The enforcement staff is “ill-equipped for a full-scale nationwide inquiry.”

Secondly, per Dellenger, the NCAA worries that enforcement could raise antitrust legal challenges. That is a big reason why boosters like John Ruiz in Miami is not concerned.

He spoke with Dellenger and made it clear that he feels confident in how things are running.

“We feel our platform is the only one in the country that truly would be resilient to any attack by the NCAA, because we do have a quid pro quo,” said Ruiz. “The payments are made electronically to them every two weeks. It’s a pretty well-oiled machine.”

He also gave a great analogy as to why he is not worried. Dellenger added that Ruiz is not alone.

“Boosters say they are in compliance with their state laws governing NIL and/or the NCAA’s interim policy—and they have proof, those who spoke to SI say.”

This is a huge move. Countless coaches, particularly in football, have spoken out about NIL. Many of them have called the current landscape as “free agency.”

Meanwhile, a senior in high school signed an NIL deal worth up to $8 million. Will it hold up? Will the NCAA look into its legality? Can it do anything about the deals that have already been inked without legal ramifications? We will see.