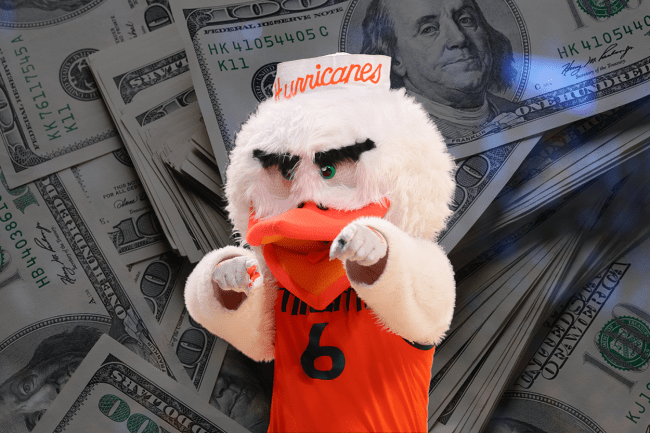 Over the course of the past few months, the Miami Hurricanes have received quite a few commitments from high-profile recruits and transfers. Coincidentally, the vast majority of them coincide with large NIL deals.

Although pay-for-play remains a direct violation of NCAA legislature, the new rules on Name, Image and Likeness allow an above the table workaround. Although players cannot receive money directly in exchange for their commitment, there is no way to deny the fact that lucrative deals aren’t playing a role in recruiting.

That has always been the case in collegiate athletics, but with NIL, the money is inflated. As deals are made in the public eye, athletes can value themselves against the current market.

For example, a four-star wide receiver recruit might see a three-star recruit sign a deal worth $200,000. He then can go to the boosters and say “well, I’m worth more than that guy.”

It has already play out on multiple occasions. Even at Miami.

John Ruiz, a billionaire booster for Miami (and Florida International), is bankrolling the Hurricanes with massive NIL deals.

He has pledged to pay out $10 million in NIL deals through his company LifeWallet. And since doing so, The U has been crushing it on the recruiting trail.

Ruiz and his company have already worked upwards of 50 extremely lucrative deals across various sports. All but two of them have been with current Hurricanes or players who recently transferred into the program.

After offering a new transfer basketball star a deal worth $800,000, an already enrolled Miami basketball player said he was going to transfer if his NIL deal was not increased. Ruiz said no and the player backed off of his statement.

Nevertheless, it happened. A threat was made about NIL money.

Of course, the headline sparked a lot of controversy. Ruiz’s influence on Miami’s success — on top of all of the other conversations being had about NIL — has quickly become a concern across college sports.

As a result, there is a big push for things to change regarding NIL legislation. Two Power Five conference commissioners were in Washington D.C. to lobby for Congressional help last week, and a “crackdown” is reportedly coming from the NCAA.

Whether anything actually comes from the NCAA is yet to be seen.

However, even if there is some sort of NCAA “crackdown” on NIL, John Ruiz and sports agents are not concerned.

In a recent report in The Athletic from Stewart Mandel and Nicole Auerbach, Ruiz gave the perfect analogy for why he’s not scared of the NCAA.

He said that if the NCAA were to try and retroactively sanction a program for what businesses like his have done would be like “not posting a speed limit on a road and then ticketing a driver for speeding.” Ruiz also questions how a school can be punished for the actions of its boosters.

“The biggest issue is that the schools should be able to participate (in NIL),” he said. “How can you be punished as a member school for the actions of those you can’t really control?”

What the NCAA plans to do moving forward is unclear. And if they decide to do something, the odds of one of the most incompetent governing bodies in the world actually enforcing their crackdown are slim. Either way, boosters like Ruiz aren’t concerned.