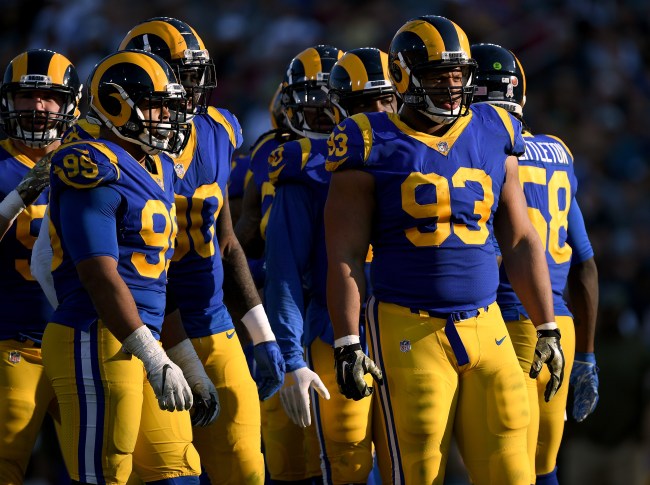 Ndamukong Suh is historically a dirty player. This isn’t even an opinion, it’s a fact, and it’s based on his career thus far. In the first four years of his NFL career, he was fined $216K+ for dirty play. In the first two years, he was flagged for nine personal fouls which were the most of any player in that time span. Later in 2012, he was named the ‘least liked player’ in the NFL.

It looks like Ndamukong Suh is back on his bullshit after he was filmed throwing a viciously dirty hit on Kansas City QB Patrick Mahomes last night, a hit that was missed by the NFL’s supposed ‘all-star’ group of refs.

Suh can be seen throwing a forearm hit to Mahomes’ helmet before wrapping around Patrick’s neck. The play was shared on Twitter where it became apparent that A LOT of people watching the game at home saw the dirty play in real-time which begs the question of how in the shit this penalty was missed by the supposed all-star refs.

Here’s the play in question:

Somehow the refs didn’t throw a flag on THIS? Classic Ndamukong Suh. pic.twitter.com/9t8tXO0nsv

NFL Twitter had a lot to say about this and it doesn’t appear as if anyone was coming to defend Ndamukong Suh’s visibly nasty play on Mahomes.

Ndamukong Suh clubbed Mahomes in the helmet as he was sliding. No flag from the all-star officials.

Ndamukong Suh is a bitch and will always be a bitch. Try to hurt my QB again.

I feel like Suh should have been ejected for that. Really incredibly dangerous and cheap play.

Punch tackles and choke holds are apparently legal in 2018.

Suh punch tackled Mahomes and put him in a choke hold after and there was no flag. 🤷‍♂️ pic.twitter.com/fRPDKCb1FO

Were the refs just tired of throwing too many flags and wanted to sit this play out?

I, for one, am shocked that Suh punched Mahomes in the side of the head.

In a game with like 20 flags that didn't get one?

His dirtiness is undefeated pic.twitter.com/4NpmPaVKvy

Charles Curtis at For The Win pulled up this clip of the LA Rams practicing QB tackles on the dummy and I think it’s worth noting that Ndamukong Suh isn’t really into tackling by the book even when it’s in practice. He’d much rather throw punches given the evidence here.

Will he be fined and/or suspended for the play against Patrick Mahomes once the league has had time to review it? It’s certainly possible, but they could also act like nothing happened and go about their business. Given that it’s Suh we’re talking about I’m inclined to believe that the league will look into this but the Rams are also firing on all cylinders right now and I could see the NFL wanting to leave them alone for the time being. Thoughts?