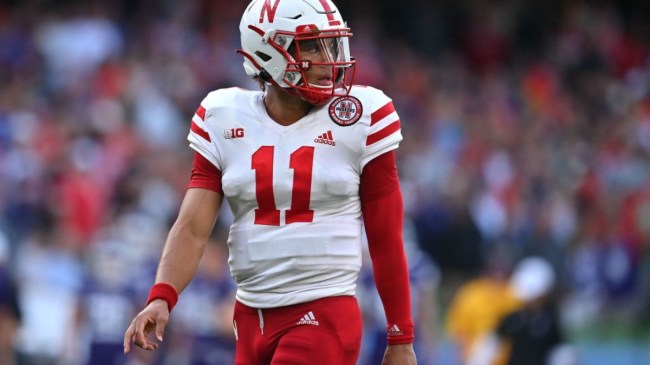 Casey Thompson has been unbelievably good today in the Nebraska Cornhuskers’ season opener. In the first half of the team’s matchup with Northwestern, Thompson threw for 228 yards and a touchdown and added another TD on the ground.

He’s been even more unbelievable to start the second half of the game.

Nebraska entered the second half trailing 17-13, but Thompson refused to let that deficit last for very long.

After the defense started the half with a quick stop, Thompson took over and made what will certainly be the play of the week in college football’s Week 0.

Nebraska was facing a 3rd and 8 from their own 24 when Thompson dropped back to pass. Northwestern quickly got pressure in the backfield, forcing Thompson to scramble to his left. Thompson made a run for the line of scrimmage, but there was a Northwestern defender waiting there for him.

Thompson turned back and scrambled backwards, turned, and fired a pass 45 yards in the air, which was caught by Isaiah Garcia-Castaneda as headed toward the left sideline.

That play picked up 58 yards for the Cornhuskers and set them up at the Northwestern 18-yard line. 5 plays later, Anthony Grant carried the ball into the end zone to give Nebraska a 21-17 lead.

This throw and catch was the second highlight reel connection of the day for Thompson and Garcia-Castaneda. The Cornhuskers opened the scoring on their first drive of the game with an impressive 32-yard touchdown grab from Castaneda.

Thompson and Garcia-Castaneda are certainly going be a duo to keep an eye on in the Big 10 this season.