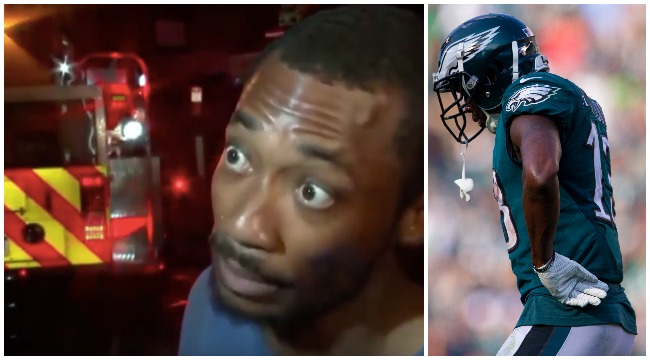 Folks, it’s about to get real Philly up in here, so brace yourselves.

Yesterday, the fine gentleman that you see in the photo above and the video below went nationally viral for both his heroic behavior and his hilarious commitment to all things Philadelphia sports.

Local hero Hakim Laws was being interviewed by CBS after he bravely helped save some young Philadelphia children from a burning building. And while the man’s courageous actions were obviously widely revered, it was what he said about said actions that caught everyone’s attention.

“Then I seen a guy hanging out the window — you know screaming that his kids was in there, things like that — so, I ran to the back door to see if it was open, and it was, I ran upstairs, but then I was breathing the smoke, I ran back downstairs, and by that time, the firetruck was pulling up. And ironically, me and my old co-workers took the ladder off the truck, raise it up, and assisted people down. My man just started throwing babies out the window, but we was catchin’ them… unlike Aghlor.”

That’s right, people — in the middle of explaining his own heroism, Laws found the time to absolutely bury Philadelphia Eagles wide receiver Nelson Agholor, who has had a penchant for dropping passes during his NFL career.

The internet obviously took the clip and ran with it, as it was yet another example of how the city of Philadelphia is just different. However, the internet wasn’t the only ones who noticed Laws’ heroic hilarity, as the man he took the time to clown on — Nelson Agholor — saw the clip and invited Laws and his family to the next Eagles home game.

Thank you for being a hero in the community, would like to invite you and your family to the next home game

Twitter help me out and get me in touch with him https://t.co/uqML3eJ0QT

What a come-up for Hakim Laws — one day he’s catching babies from a burning building, making fun of his favorite football team’s #3 wide receiver, the next day he’s being invited to The Linc to see his beloved Birds take on the Jets. Life comes at you fast, so don’t drop it… like Agholor.