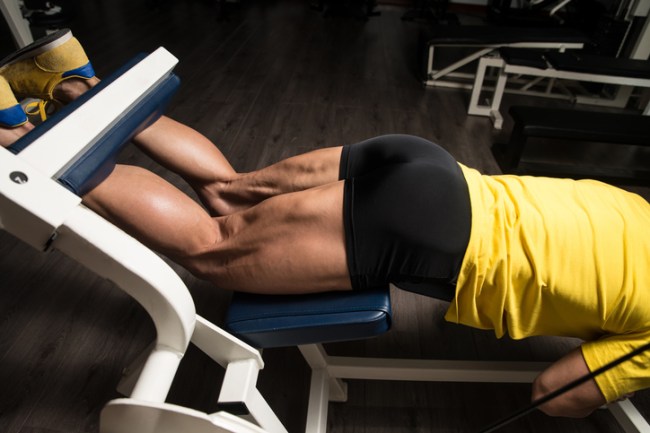 As a BroBible reader, you know that squats and deadlifts are key to building more muscle and melting away mounds of body fat.

So what do you do when you hit a wall and your deadlift and squat numbers stall out like Cuba Gooding Junior’s career after winning an Oscar?

You curl the most important bicep muscle you have.

“Wait, Robbie, you’re telling me that there is a bicep muscle in my leg?”

I know that sounds like blasphemy saying arms aren’t important, but when it comes to big lifts like squats and deadlifts, not training the bicep femoris will lead to stalled progress and less gains.

Where and what is the bicep femoris?

The bicep femoris is one of the three muscles that make up your hamstrings–along with the semitendinosus, and the semimembranosus. It’s primary function, however, is performing knee flexion–the bending of your knee.

When it comes to leg day, often times, you undertrain the hamstrings while you over train the quads. It’s understandable–I get it–the quads are what people will see when you rock short shorts or swim trunks in the summer.

So, why would I need to care about my hamstrings if no one is really going to see them?

If you care about things like deadlifting, decelerating when you run, or those sweet ninja kicks you practice when no one is around, then yes, you should care about training your hamstrings.

Weak hamstrings will limit the amount of power you can produce for explosive movements like running, jumping, or changing direction.

Skip training your hammies or let them lag behind and not only will your performance in the gym crash and burn faster than the Cleveland Browns at the NFL draft, but you raise the risk of injuring yourself.

In today’s world we all sit far too much.

Sitting weakens your hamstrings and if you’re not properly strengthening them you can create an unbalanced quad-to-hamstring ratio which can lead to knee pain and instability, and according to some studies have pointed to possible increases in ACL injuries because of this.

Let’s get back to what I mentioned at the beginning, the hamstrings are the biceps of your lower body, which means you can do curls!

I’ve written about this one before, but one of the best ways to warm up your hamstrings or to end a heavy leg day is with Swiss Ball Hamstring Curls.

You can Romanian Deadlift 185 and deadlift a couple hundred pounds with ease, that’s great, but this little torture device—which for some reason people use for sit ups—is one of the best tools you can use in the gym for a stronger backside.

The great thing about training the hammies is that there are a ton of exercises that can be done supine (on your back) to target the hamstrings.

Lying on your back might make these look super easy. The biggest lesson I’ve learned from lifting is this: what looks easy usually will leave you the most sore the next day.

These bad boys will do just that. You’ll need either Valslides for this or you can use paper plates or a towel for your feet to slide on. Good luck with these bro and enjoy the burn.

This a little old school hamstring movement but it will change your life. Or at least leave you waddling the next day.

Best way to perform these is to lie down in a rack, holding on to the rails. With your legs fully extended and laying on top of the plate–your heels should be in the plate’s hole–drag the weight towards you, bending your knee, then return it to the starting position.

Take the next couple of months and spend some quality time hitting your “other bicep” muscle before summer. Not only will your gym performance skyrocket but it will make your legs look larger, help improve your overall posture, and should you ever need to become a ninja, you’ll want powerful hamstrings to kick your enemies in the face.