Where Should Bill Belichick And The Patriots Go From Here If Cam Newton Continues To Play Poorly? 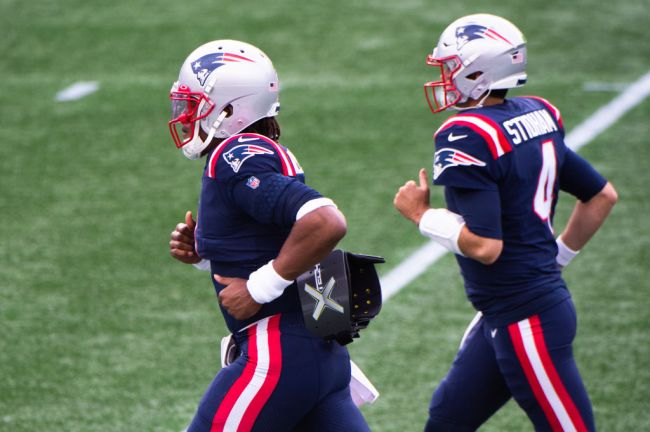 Bill Belichick made a change at quarterback in the fourth quarter of New England’s 33-6 loss to San Francisco on Sunday, tapping Jarrett Stidham to replace Cam Newton. Is this a decision that should last beyond Week 7?

When the Patriots initially signed the former Carolina Panthers signal caller to a one-year deal during the offseason, the sports world went ablaze at the idea of a duel-threat quarterback stepping into offensive coordinator Josh McDaniels’ system as Tom Brady’s replacement. Newton’s first two weeks of the season only added kindling to the fire and the 31-year-old former No. 1 overall pick posted consecutive games with a QBR over 70, threw one interception on 63 attempts and added 122 yards and two touchdowns on the ground. It appeared as though every non-New Englander’s nightmare had come to fruition; the transition away from arguably the greatest quarterback of all time was seamless and the perennial powerhouse Patriots were playing loose and having fun.

However, that narrative quickly changed as a stagnant Week 3 performance (that was still a win) brought Newton back down to earth and a positive COVID-19 test forced him to sit out in Week 4. When the Auburn alumnus returned in Week 5, the red flags started raising themselves. The Patriots lost to a less-than-stellar Broncos team and Newton struggled to find a rhythm and threw two crucial interceptions. Everybody has a bad game once in awhile, so his ability to bounce back would be crucial.

That’s where Sunday comes in. Newton did not bounce back, New England mustered only three points, and San Francisco rode its early lead to a massive victory. He went 9-of-15 for 98 yards passing, had five rushing attempts for 15 yards and threw three interceptions. Yikes.

After he threw his third pick on a really poor throw, Belichick gave Newton the hook and called for Stidham to take the fourth quarter. Stidham, a second-year guy also out of Auburn, was the most likely candidate to fill Brady’s shoes before the offseason signing. Perhaps he could provide a spark to the offense.

He didn’t. Stidham finished with a 39.2 QBR that was comparable to his predecessor’s and ended his first of two drives with an interception.

After the game, Belichick was asked about his decision to bench Newton and where he was planning to go at quarterback moving forward. He showed full confidence in his offseason signing.

But it begs the question, is that the right move?

The Patriots are 2-4, 2.5 games behind the Bills, whom they play next week, in the AFC East. Their offense has averaged less than 300 total yards in the last three games, all losses, and simply cannot get anything going. It may be an overreaction to call for Stidham or Brian Hoyer to start at this point. So long as he is healthy, and he may still be reeling from his two weeks of COVID-related absence and illness, Newton clearly provides the better chance to win for now.

It is the future conversation that becomes more interesting.

Should Belichick’s bunch lose this coming Sunday, the road to the postseason becomes even more difficult and another loss or two could put it out of reach entirely. If that happens, owner Robert Kraft and his future NFL Hall of Fame coach and general manager Belichick will have to start thinking about finding a quarterback in free agency or drafting one in April. Does the front office trust in Stidham enough to give him the keys, as many thought would happen before the season? Can Newton turn the season around and earn himself a longer-term contract? Do the Patriots trade up for someone like North Dakota’s Trey Lance, or even as high as Justin Fields? Will Belichick find himself another late-round quarterback that rights the ship next season?

There are a lot of problems that need to be solved quickly in New England and a team that has won its division 11 years in a row is surely not in a position to think about the future while the playoff picture remains mathematically afloat. But we are. Stay tuned.