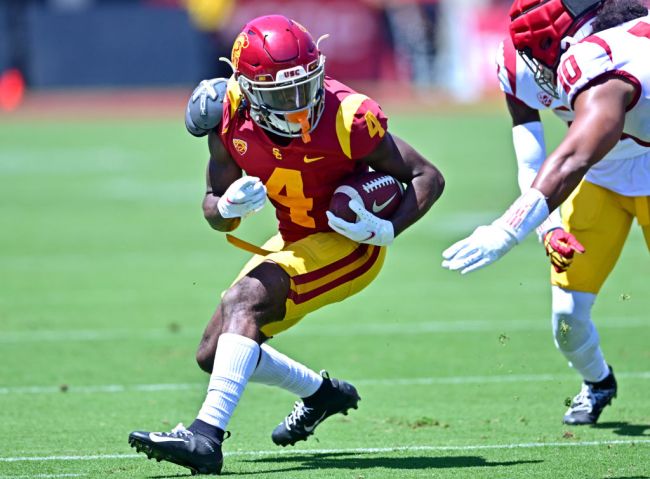 College football’s transfer portal has been very kind to the USC Trojans this year. The program convinced highly touted quarterback Caleb Williams to follow Lincoln Riley to California. He also brought wide receiver Mario Williams with him. Now many are expecting them to land Jordan Addison as well.

It turns out that this transfer portal success might have another unexpected benefit. The football program has landed a player that can also help the USC baseball team.

In an appearance on the Momentum Truck podcast, Mario Williams revealed that he is planning to play baseball for USC next spring.

Williams entered college as one of the top wide receiver recruits in the country last season. As a freshman, Williams made 35 catches for 380 yards and 4 touchdowns while catching passes from both Caleb Williams and Spencer Rattler. He truly had the chance to show off his talents in October when he posted 5 catches for 100 yards and a TD against Texas Tech.

He had planned to play baseball for the Sooners this year, but his decision to enter the transfer portal changed those plans and transfer rules prevented him from playing at USC this spring. He plans to play in the outfield and expects to bat at the top of the order. He also had an interesting response when asked which sport he prefers.

“You last longer in baseball. Football, I feel like it’s just natural. Baseball is a lot of technique.”

Maybe Williams will be the next former Oklahoma player to be drafted in both the MLB and NFL.