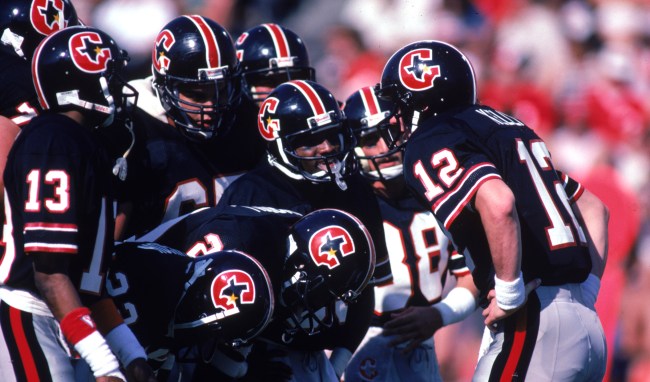 When Fox announced that it was starting a new USFL last year 35 years after the league folded, one of the first questions was, “Why?”

Another popular question was, “Does Fox really own the rights to the original USFL’s team names and logos?”

“I was surprised when I heard about it,” Ehrhart told the Philadelphia Inquirer. “I want to dig into it and see who they’re claiming they acquired these rights [to the name] from. Because it didn’t come from any legitimate source.

“My guess is there’s some knucklehead out there who claimed he had registered the name and had the rights to it. We’re not being antagonistic. But if they want to do this, they should do it the right way and talk to the actual people, not some guy who sent in an internet registration or something like that.”

Sadly, a move to playing games in the fall, going head to head with the NFL, doomed the popular football league and forced it to disband.

35 years later, Fox revealed that not only is the United States Football League returning, it is returning with all eight teams using the same names as some of the original franchises including the Michigan Panthers, Tampa Bay Bandits, Philadelphia Stars, New Jersey Generals, Houston Gamblers, Birmingham Stallions, Pittsburgh Maulers, and New Orleans Breakers.

On Monday, a group of former United States Football League owners and executives calling themselves the Real USFL, LLC, filed a lawsuit in California against Fox and the new USFL.

The Real USFL LLC is suing FOX for creating a new USFL (United States Football League), which is set to start April 22.

It claims that FOX's USFL franchise is an "unabashed counterfeit" and that it has no right to capitalize on the goodwill of the league.https://t.co/sy4YkFy1NI pic.twitter.com/8GWqpSZ3at

“Defendants have infringed upon the Real USFL IP by, among other things, knowingly and willfully (i) adopting nearly identical league and team marks and logos of an existing and well-known brand, (ii) producing and selling fan apparel bearing the infringed USFL marks, (iii) intentionally misleading consumers to believe the USFL was returning, and (iv) by using the domain name theusfl.com,” the lawsuit reads.

Will the new USFL actually be able to begin play as scheduled now?

The lawsuit also asserts that the new league is an “unabashed counterfeit” and that “in spite of its full knowledge of at least 11 years’ continuous use of the USFL marks, Fox has continued marketing its counterfeit league as a ‘relaunch’ of the USFL.”

It also points out that Ehrhart signed a licensing deal with American Classics for the original USFL in 2011 as evidence that the trademark was not defunct.

“Over the years, Mr. Ehrhart has also worked to preserve the USFL’s legacy by, among other things, organizing league and team reunions, and authorizing and appearing in (a) 30 for 30 documentary,” the lawsuit continued. “Relevant here, Mr. Ehrhart has also entered into certain media licensing arrangements on behalf of the USFL for apparel, books and other media.”

Pro Football Hall of Famer and former general manager of the Jacksonville Bulls in the original USFL, Larry Csonka, explained out in a video related to the lawsuit, “It boils down to this. If the USFL doesn’t have any value, why did Fox want it?”

“Fox is trying to reap where it did not sow and profit from confusion among fans of the real USFL, by claiming the legacy of something it didn’t build.,” said Nicholas Matich of the McKool Smith law firm, which represents the Real USFL LLC. “The Real USFL is acting to protect the legacy of the players, owners, coaches, and staff of the historic league. Quite simply Fox is claiming to be something that it’s not—the heir of the 1980s league that launched numerous hall-of-fame careers and changed the game of football.”

“Fox could have easily started its own league with new teams, but instead chose to take the goodwill and nostalgia of the original league without the permission of the people who actually created it,” said Alex Brown of The Lanier Law Firm, co-counsel for the former USFL owners and executives. “Fox can’t dispute that the ‘Real USFL’ marks are recognizable and valued because they’re using them and purposefully confusing its league with the original. Rather than do the right thing, Fox has chosen to try and bully the prior owners into submission. That’s not going to happen.”

The new USFL is scheduled to begin playing games on April 16th. It may just not be able to call itself the USFL.