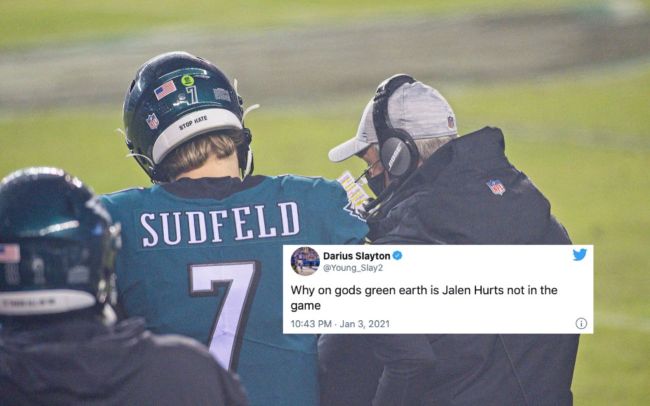 Hey y’all, Eric here, famed New York Giants fan who has never once in my entire life rooted for the New York Jets here. Let me tell you, as a lifelong fan of the G-MEN, the way Week 17 of the NFL season played out was just heartbreaking. Daniel Dimes and the boys left it all out on the field, as they not only clawed their way to a respectable 6-10 record, but they further humiliated the Dallas Cowboys in the process. And as a fervent Giants fan, that’s really all you can ask for during the first season under a new head coach.

If the Jets win this fucking game I’ll be a Giants fans before Carrie Underwood finishes the first verse of Waitin’ All Day For Sunday Night. So help me god.

But then, as always, our lesser than Jersey Turnpike brothers let us down, as the Philadelphia Eagles — who are increasingly making a convincing case that they won their Super Bowl through voodoo Pennsylvanian black magic — openly tanked on national television against the Washington Football Team as they benched starter (and potential future franchise QB) Jalen Hurts at the start of the fourth quarter in favor of longtime back-up Nate Sudfeld.

Despite how angry I — a decades-long supporter of Big Blue — may be on this first Monday of the new year, my rage pales in comparison to that of the actual New York Giants players, who immediately took to Twitter to blast the Eagles franchise and their, uh, unsportsmanlike conduct.

Can someone make it make sense to me what’s going on….?

This is why we don’t like the Eagles. https://t.co/Efe7kEPtES

You really do gotta feel for the Giants, because if anyone in the NFC Beast deserved an invitation to the postseason, it was the 6-10 Giants, who boasted the National Football League’s 31st best highest-scoring offense (ahead of only the miserable New York Jets, who I am definitely not a fan of, and never have been) and were outscored by 77 points this season. With regular-season wins over the likes of the Eagles, Cowboys, Bengals, Seahawks, and Washington Football Team, who knows… maybe they could’ve pulled off the upset against the *checks notes* Tom Brady-led Tampa Bay Buccaneers. Justice for the G-Men.