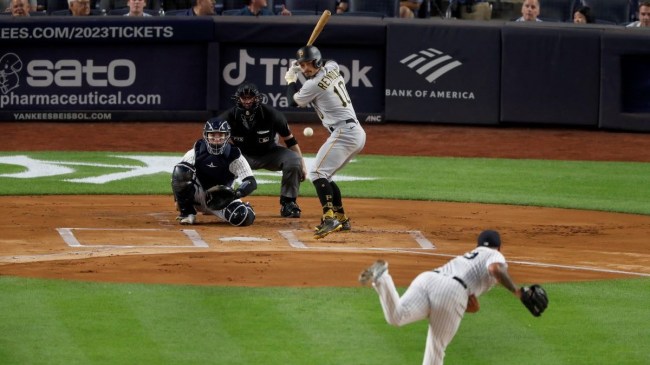 The New York Mets, not the Yankees, have stolen the headlines thus far during MLB free agency.

While the Yankees made perhaps the most important move in free agency by tying down superstar Aaron Judge, it’s the Mets who have MLB executives listening to Marvin’s Room while sipping wine and crying.

The Mets lost superstar start Jacob DeGrom to the Texas Rangers in free agency. But they’ve responded with a fleury of big-name signings, headlined by Justin Verlander and most recently shortstop (soon-to-be third baseman) Carlos Correa.

But the Yankees aren’t just going to sit back and let their crosstown rivals have all the fun. Instead, a new report suggests that the Yanks may yet have big move of their own up their sleeves.

While the Pittsburgh Pirates are an embarrassment to the entire state of Pennsylvania, star center fielder Bryan Reynolds is far from it. The 27-year-old slashed .262/.345/.461 last year with 27 home runs, 62 RBIs and 74 runs scored.

He represented Pittsburgh in the 2021 MLB All-Star game and appears ready to finally try to win some games. Reynolds requested a trade earlier this month and it appears the Yankees believe they’re his huckleberry.

Jon Morosi of MLB Network reports that the Yankees have reached out to the Pirates to discuss the framework of a deal. Though Pittsburgh is reportedly seeking pitching prospects, while the Yanks have more position players to offer.

Sources: #Yankees among teams in contact with #Pirates on Bryan Reynolds over recent weeks; one obstacle to a trade is that Pittsburgh prefers starting pitchers to headline the return and top end of Yankees’ system is deeper in position players. @MLB @MLBNetwork

In addition to re-signing Judge, the Yanks added two-time All-Star starting pitcher Carlos Rodon to the rotation in free agency. New York went 99-63 and won the AL East in 2022, but was unceremoniously dumped out of the playoffs by the Cleveland Guardians in the ALDS.

With Judge and Rodon on board and a potential Reynolds move in the chamber, it appears the Yankees are not yet ready to cede their spot as the top team in New York.