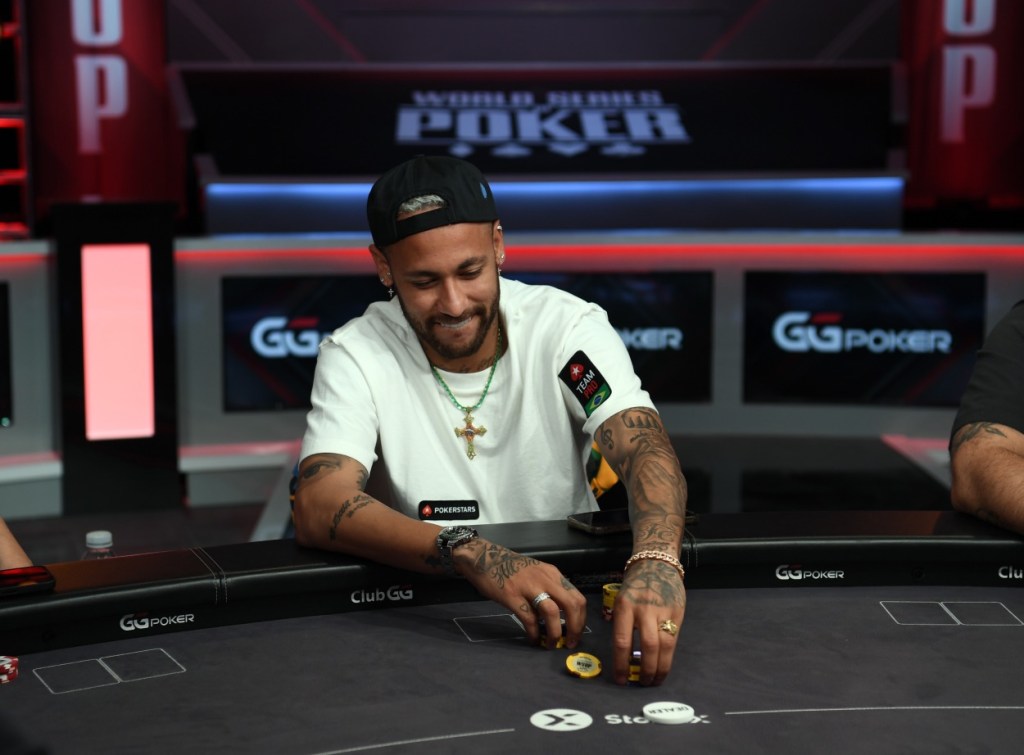 Brazilian soccer superstar Neymar is just a few weeks removed from winning another Ligue 1 title with his team Paris Saint-Germain FC. They also recently made it to the round of 16 in the Champions League but Neymar has a break and used that to fly to Las Vegas to compete in the 2022 World Series of Poker for his first time.

Neymar is an avid poker player, or so it seems. I say that because he actually qualified for his WSOP seat all the way back in the Summer of 2016 after playing in a World Series of Poker 2-table satellite tournament which covered his $10,000 buy-in into the WSOP Limit Hold’em Championship.

His schedule was too busy in 2016 and he had to take a rain check so Neymar returned this year to play against seasoned poker pros like Daniel Negreanu, Eric Froelich, Scott Seiver (who has been RED HOT), and others. Unfortunately for Neymar, he got absolutely worked over by the competition.

The World Series of Poker’s report for the tournament lists 92 total entries into Event #26: Limit Hold’em Championship. With a $10,000 buy-in an event like this is a little rich for tourists and tends to attract better players despite being a Limit Hold’em event.

Even though the WSOP website lists 92 total entries there are only 59 players with chip counts listed on their website and of those 59, Neymar only beat one of them. He finished in 58th (out of 59 listed) and didn’t even make it to Day 2 of the 3-day tournament.

Of course, he’s a pro athlete and not a poker pro. Everyone he was playing against has likely seen and played tens of thousands of more hands than him. But Neymar had some characteristics in his favor. His estimated net worth is over $200 million so the money wouldn’t factor into how he played. And he’s a hyper-competitive professional athlete who wouldn’t get bullied by tough play.

Interestingly, there were 2 other Brazilians playing in the $10K Event #26: Limit Hold’em Championship. So on the very off chance that none of the Americans playing recognized him there’s a 100% chance one of the two Brazilian players did. And word certainly spread fast about who he is.

He got off to a hot start

A post shared by World Series Of Poker (@wsop)

On his very first hand of the tournament, Neymar came out HOT. He actually cracked his opponent’s aces when he made two pair. Neymar’s opponent, David Lieberman, had AcAd and three-bet an early raise. Neymark called from the ‘cutoff’ position with 8s7h.

The flop came 8c4d3h giving Neymar a pair of 8’s. Lieberman bet his AA again and the turn came 7s to give Neymar two pair (8s and 7s). The river brought out a Ks which did nothing for either player. Both checked and turned their cards over and Neymar raked in 11,00 chips (71K chip stack) on his first hand of the tournament.

Each level of Day 1 in the $10K Event #26: Limit Hold’em Championship lasted 60 minutes so Neymar stuck around the tournament for over 5 hours but less than 6. There are a lot of hand updates from the tournament listed on their website (link above) if you want to read more about what he did in the tournament.

Neymar participating is MASSIVE for the game

Having a guy like Neymar playing in the World Series of Poker is just ENORMOUS for the game of poker. He has 175 million followers on Instagram and similar numbers on every social media site.

While he might not be a ‘poker’ celebrity he’s 100% the biggest global star to play at the 2022 World Series of Poker and his participation shines a massive spotlight on this incredible event. It will be cool to see him buy into some WSOP events in the future.