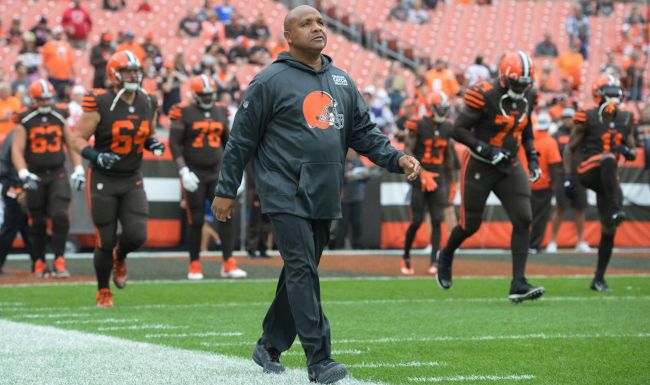 The National Football League has officially opened an investigation into the Cleveland Browns franchise over allegations of purposeful tanking, according to a report from Sports Illustrated.

The investigation stems from comments made by former head coach Hue Jackson, who implied that the Browns paid him to lose games during his tenure. Jackson, 56, was the head coach of the Cleveland Browns from 2016 to 2018, and made the allegations in the wake of Brian Flores’ lawsuit against the Miami Dolphins back in February. Jackson compiled an infamous 3-36-1 record during his time as the Browns’ head coach.

The NFL is investigating the Cleveland Browns for tanking

SI reports that former Securities and Exchange Commission chair Mary Jo White, who is also investigating Flores’ allegations of tanking in Miami, will be leading the investigation into Cleveland’s actions.

Reached by Sports Illustrated for comment, Hue Jackson said, “Two years ago I tried to do this the right way, through the bylaws and constitution of the National Football League, to ask them to investigate the Cleveland Browns for all the allegations that I’ve made. So why open an investigation now?”

The Cleveland Browns franchise also provided an official statement to SI via a spokesperson:

“Even though Hue recanted his allegations a short time after they were made, it was important to us and to the integrity of the game to have an independent review of the allegations. We welcomed an investigation and we are confident the results will show, as we’ve previously stated, that these allegations are categorically false. We have fully cooperated with Mary Jo White and look forward to the findings.”

It’s certainly been a headline-grabbing offseason for the Browns, as the team — which many expected to compete for a Super Bowl last season — sent the Houston Texans a massive package of draft picks in exchange for Pro Bowl QB Deshaun Watson, which likely spells the end of Baker Mayfield’s tenure as the franchise QB.

RELATED: Baker Mayfield ‘100%’ Feels Disrespected By The Browns But Explains How He Can Walk Away Proudly