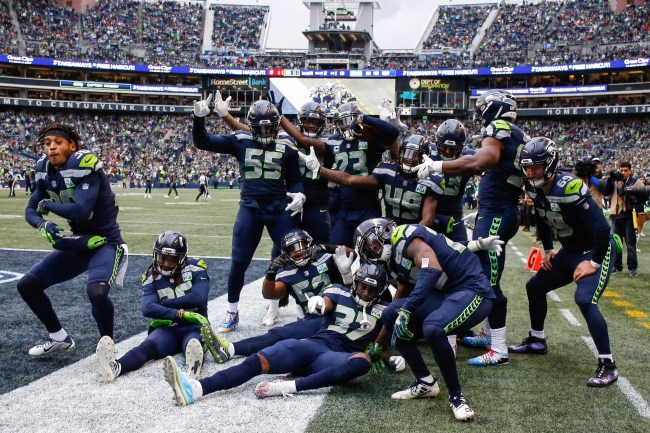 NFL celebrations during the 2018 season were some of the best fans had ever seen. We had the Seattle Seahawks doing their little dance following a touchdown. We saw the Pittsburgh Steelers do a little hide-and-seek action. And, finally, the Minnesota Vikings had a limbo contest after one of its scores. Overall, players got super creative to show that spiking the ball or dunking it over the goal post crossbar were so 1995.

As great as all those NFL celebrations were, though, the league is considering a new rule that will slightly change the participants of those team touchdown dances and such, because, you know, that’s what the NFL does. Remember, “No Fun League”, guys.

Although the proposed changes aren’t anything too major, according to The Washington Post, the league’s looking into prohibiting any players from the sidelines to leave and join in on the end zone celebrations with their teammates, with any participants who do so costing his team a 15-yard penalty. Players who are on the field at the time of the score can still act things out, however.

The league, at the suggestion of some teams, will give consideration to barring players from leaving the sideline to join on-field celebrations, according to people familiar with the NFL’s inner workings.

“If you’re on the field, fine,” one of those people said. “There would be no changes there. [But] there are some coaches and some clubs who don’t want to have players leaving the bench area to participate.”

A violation of the rule, if enacted, would result in an illegal celebration being called against the offending team and a 15-yard penalty being assessed. Currently, the NFL rule book prohibits any celebration that involves baiting or taunting an opponent; includes a violent gesture or is sexually suggestive or offensive; or is deemed prolonged or excessive.

NFL celebrations became more fun prior to the 2017 season, when the league announced that it would be more lenient with how players could be more free and creative following a touchdown. Suddenly, the celebrations became must-see TV, with fans loving how teams would script things before the game or on the sidelines. And, while that would still be able to happen if this new rule is passed, it just limits some other guys from joining in on the fun.

The Washington Post piece reported that the NFL’s Competition Committee is discussing the topic during this week’s meetings at the NFL Scouting Combine, and, should the group decide it’s worth presenting to owners at next month’s annual league meetings, it would then need to be voted on by 24 of the 32 teams in order to pass.

There’s really no harm in making this proposal a rule, but, let’s face it, who’s dying because a couple bench players are taking part in dancing around with their teammates? Nobody. It may take a few more seconds to clear everyone off the field, but who cares, let the players have fun together — it’s what’s made NFL celebrations so dope the past couple years, so the more the merrier.