After Just One Home Game, The NFL Is Reportedly Thinking Of Moving The Chargers Go Back To San Diego 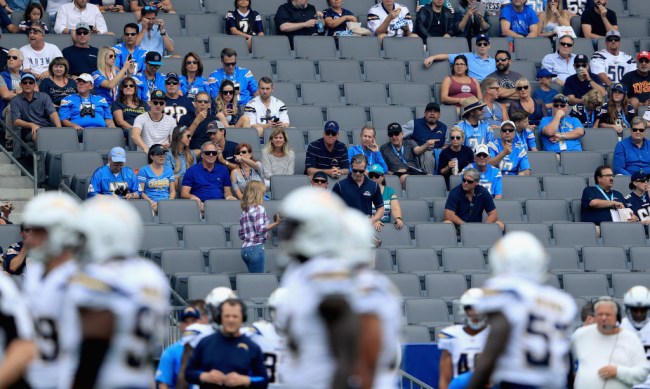 The Chargers’ move to Los Angeles started out very poorly from the very beginning when the team got mocked mercilessly on social media over their new logo for Los Angeles. And it’s all gone downhill from there.

When the team announced it would be playing its home games at the StubHub Center, which seats just 27,000 people, and not at numerous other, much larger venues that are available in the greater Los Angeles area, many were scratching their heads.

Wouldn’t there be more fans wanting tickets to see them play than that? In what seems like sort of a self-fulfilling prophecy, the answer to that question was a resounding no as they couldn’t even sell out their very first home game in the new city.

In fact, there were so many fans of the opposing team, the Miami Dolphins, on hand as opposed to Chargers fans that they cheered so loudly that they fooled the pyrotechnic crew into setting off explosions when the Chargers missed a game-winning field goal attempt.

There is a large contingent of Miami Dolphin fans at StubHub Center. The crowd is chanting, "Let's go Dolphins!" pic.twitter.com/QpspaO7hQM

Now, according to The Athletic’s Don Banks, the NFL is strongly considering making the Chargers move back to San Diego.

“The former Sports Illustrated reporter, who has worked for NFL Media and currently writes for The Athletic, told a San Diego radio station on Thursday the NFL never wanted to lose San Diego as a market and could force Chargers owner Dean Spanos to take the team back.

“I have been painted a picture from people I’ve talked to that the league was sympathetic … to Dean Spanos’ plight,” Banks told The Mighty 1090. “Feels like he had been a ‘league guy’ feels like he had waited kind of his turn on the relocation front, thought he had the votes the year before — Jerry Jones and Stan Kroenke pretty much outmaneuvered Dean and Mark Davis with the Raiders to be the first in line for LA. So it was almost as if this was a bit of a make up.

“There are people in the league — including the commissioner — they did not want to see San Diego forsaken. They would rather there be a team in San Diego. If there’s anything viable that they could find to put the league back in to San Diego, I think they will be in that camp strongly.”

“There’s a lot of concern already. And there’s a lot of people who are thinking, ‘How can we put up with these optics for the next three years if the Chargers can’t improve the situation in Carson?’”

As for whether the NFL is thinking about making the Chargers move back to San Diego, a city in which over 43,000 people showed up to watch San Diego State play Stanford on the Saturday before the Chargers’ game in Los Angeles?

It certainly doesn’t help when even the mayor of Los Angeles, Eric Garcetti, seems ambivalent about the Chargers being there…

“We embrace any team that comes, we’re certainly happy to have the Chargers in L.A.,” said Garcetti. “But I think we could’ve been happy with just one too.”