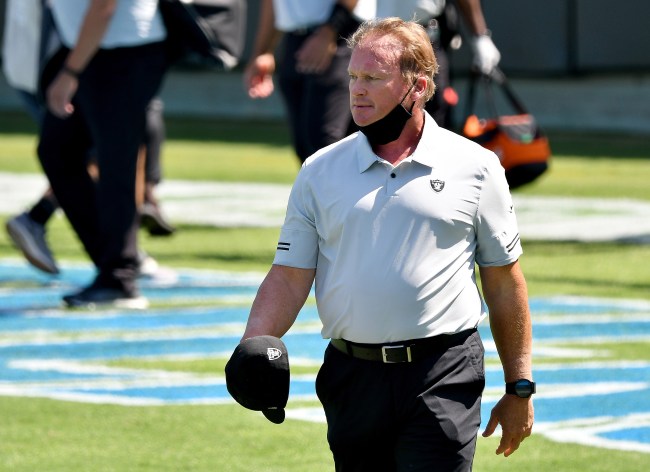 If you’ve watched any football this season, you’ve probably seen lots of NFL coaches refusing to wear their face masks during games, instead opting to wear them around their necks to try and make their voices more pronounced when yelling at players or refs. This is stupid, as wearing a mask is, legitimately, only required for one reason — so that droplets from speaking don’t float in the air and (potentially) infect somebody with COVID-19.

That’s some bullshit, because, as we’ve seen in the news, there have been lots of false negatives (and positives) when it comes to COVID-19 testing, meaning there’s a possibility that a player, coach or anyone else spending time around a team could be infected and be asymptomatic, despite what a test result claims. It’s why the league has taken such a harsh stand against NFL coaches like Jon Gruden, Pete Carroll, Kyle Shanahan and others who have been caught getting a little lazy with their face mask during games, actually fining them $100K each, along with a penalty of $250K for their franchises.

NFL fined three head coaches – – Denver’s Vic Fangio, Seattle’s Pete Carroll and SF’s Kyle Shanahan – $100,000 each for not wearing masks Sunday, and each of their teams another $250,000, sources told ESPN.

So that’s $1.05 million dollars in fines for not wearing masks.

Given the importance of trying to eliminate the spread of COVID-19 everywhere, especially in an locker room, it’s good for the league to be cracking down so hard on NFL coaches breaking protocol. And, although it seems like a harsh punishment for simply not wearing a piece of cloth around their face, the NFL’s Chief Medical Officer, Dr. Allen Sills, explained why wearing a face mask isn’t simply just a suggestion.

“First and foremost, it’s part of our agreed upon protocol between the league and the NFL Players Association,” Dr. Allen Sills, the NFL’s chief medical officer, said, via Judy Battista of NFL Media. “So it’s not optional for people to follow that protocol, right? All of the parts of that protocol are mandatory. But getting to the philosophy behind it, we’ve said consistently testing is not what keeps us safe. Tests are important, but no test is perfect. We do have those false positives and false negatives, so it is possible that you could have a negative test result and still be infected. In those cases, the face coverings are very important. So we think it’s just another step that’s important in risk-mitigation. I’ll also say that some of the public health authorities have mandated that sideline personnel wear face coverings in their stadiums in their locations. So for all those reasons, it’s not something that’s optional for us.”

Given that statement from Dr. Sills, it sure seems like NFL coaches should get used to wearing a mask for the foreseeable future. Paying $100K is steep AF — and no owner wants to spend $250K because their coach isn’t comfortable in a face mask — but if wearing one prevents the entire NFL season from getting shutdown because of an outbreak, everyone required to wear one should do so happily.