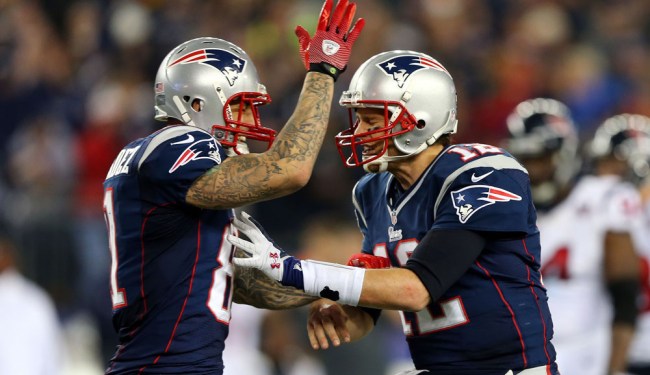 On Thursday, the NFL released a new video which compiles all of Tom Brady’s postseason touchdowns into one eight-minute highlight reel.

All the usual suspects, uh, I mean players, are in there: Gronk, Edelman, Amendola, Vereen, Branch, Vrabel, David Givens, Ben Watson, Bethel Johnson, Reche Caldwell, Jabar Gaffney, and on and on, along with a smattering of touchdowns scored by Brady himself.

One name, however, that seems to be missing is a guy who caught two touchdown passes from Brady including the one you see in the photo above during the fourth quarter against the Houston Texans during the 2013 AFC Divisional Playoffs, and that would be Aaron Hernandez.

Here’s a photo of the second TD Brady threw to Hernandez in the playoffs, a 12-yard pass in the third quarter against the New York Giants during Super Bowl XLVI. 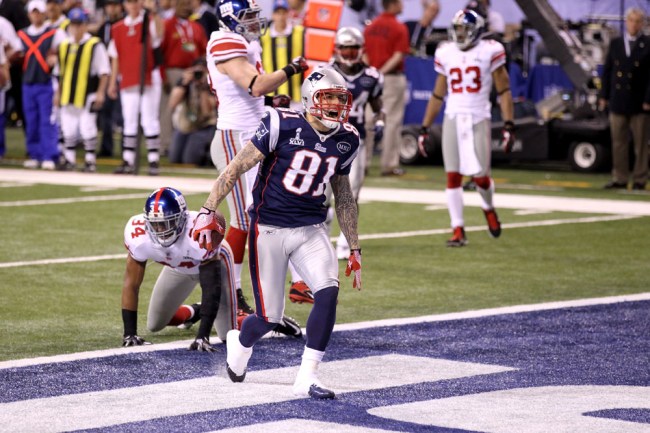 Most people wouldn’t have noticed, but Tony Massarotti of 98.5 The Sports Hub sure enough did.

Check out touchdowns number 38 and 41 in the video below and you will see what he noticed.

Perhaps the league can be forgiven for this little editing magic. But on if when Roger Goodell retires we can edit him out of the NFL’s history as well.