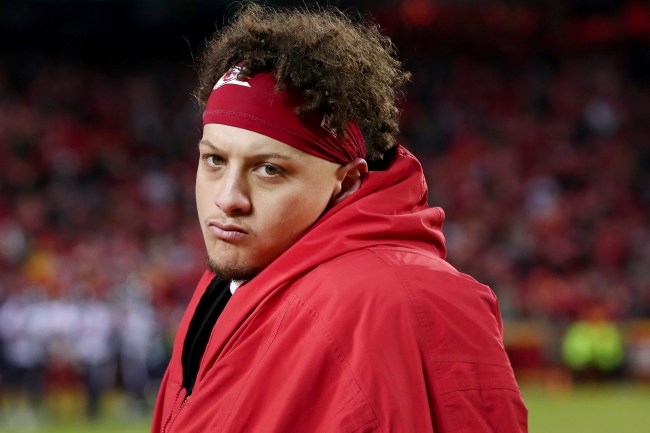 After a wild 20 weeks of NFL football that saw far too many surprises along the way to count, the dust has finally settled and we have ourselves a scintillating Super Bowl LIV matchup in the Niners and Chiefs that no one outside of Nashville or Green Bay is complaining about.

Despite so much excitement surrounding two teams that are flush with stars, I’m sure it’s safe to assume that your first thought about the Super Bowl was… is this the first Super Bowl where both teams have red in their logo? Why yes, yes it is. And they’re literally right next to each other in the official Pantone book!

Super Bowl LIV will be the first Super Bowl between two teams with red prominently in their logo.

Good freakin’ god. If this is where we’re starting before we even really start, these next two weeks are gonna be a torture chamber and by the time kickoff rolls around, a lifeless Baby Yoda will be sporting a gray beard and smoking a cigarette in the front row.

At 321 pounds, Titans OT Dennis Kelly is the heaviest player in NFL history to catch a playoff touchdown.

It would wrong not to acknowledge and say cheers to the Tennessee Titans, who made one hell of a run that no one saw coming, swiftly dismissing the Patriots and the Ravens but ultimately coming up short in Kansas City. And an emphatic shoutout goes to record-setting big fella, Dennis Kelly, who should be signing a lucrative endorsement deal with Head & Shoulders as we speak.

And quickly, before we get started, has anyone checked in on Patrick Mahomes’ girlfriend? I flat-out dare you to pump up the volume on what sounds like an unwilling rooster being burned alive.

Anyway, let’s start shakin’ those digital ropes Ultimate Warrior-style and get to the core of why we’re here, which is to praise — but mostly to relentlessly mock — all the fashion fuel we witnessed off the field.

Patrick Mahomes came to chew bubblegum and kick ass, and he was all out of bubble gum. What a masterful performance for the 24-year-old, who threw just shy of 300 yards for 3 TDs to go along with a 27-yard gallop for another touchdown. It feels like as the stage gets bigger each week, so does his performance as well as his enormous sunglasses. Looking forward to the windshield on his face come Super Bowl Sunday.

Derrick Henry has cemented himself as one of the best in the game and this blue fur coat serves as the hard evidence. However, he only rushed for 69 yards — obligatory “NICE” — on 19 carries and as a result, this is what King Henry looks like when he’s lost his crown. From a fur coat and literally a look that might kill to… some sort of Darth Vader raingear getup? Sure. Losing sucks, I get it.

Ever give a thumbs up and not make a fist with your hand? This should have been the telltale warning sign to everyone that we would not be seeing a competitive game. I do like the jacket, though. Rodgers has really put it together for this stretch run and I can’t knock him for that. However, his postgame getup, which was the same as his pregame getup, somehow has a whole different feel thanks to this death stare for the ages. Seems fine. 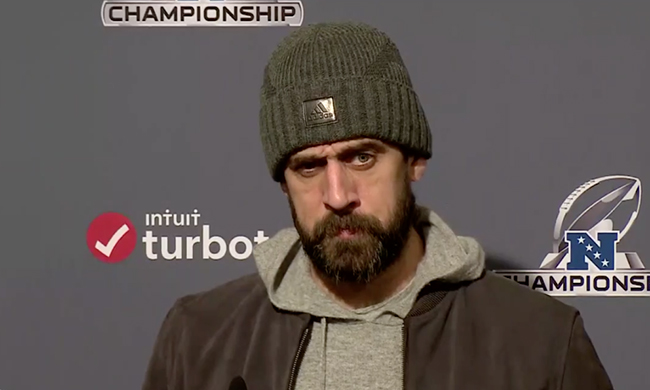 George Kittle wore a t-shirt of a topless Jimmy Garoppolo — presumably from the 2014 NFL Combine and not some swingers party — complete with a Jimmy G autograph. This is just what George Kittle does because George Kittle is a rare bird that we must protect at all costs.

Simply put, the man is a natural when it comes to providing laughs and it would probably be wise for the NFL to mic him up 24/7 for the next two weeks.

“To Jim Jim.” Unbelievable. It’s been well documented throughout the season, but George Kittle absolutely KILLS me.

Travis Kecle going with a Union x Cactus Plant FPM “I Like You You’re Different” sweatshirt and a smiley cap to match was pretty stellar. Greatly looking forward to nothing but nonsense and sarcastic banter between “KillaTrav” and Kittle right up until kickoff.

"No one else I'd rather be in a dog fight with than those guys in the locker room. It's just a great group to be with…" – @jimmypolo10 #jimmygaroppolo A great leader! #madeforthis #49ers #destinedforgreatness #destinedtowin

Jimmy GQ already has two Super Bowl rings for doing nothing and will now play for his third after going 6-for-8 and 77 yards in a performance for the ages. But seriously, if your running back is gashing the defense for 220 yards, who the hell wants to throw it? Anyway, that bomber jacket is the tits and I need to know where it can be had. Like, now.

A.J. Brown should probably share the Rookie Fashion Throne with the always stylish Hollywood Brown after dropping down in K.C. wearing this electric purple suit and Gucci sneakers. Some people just catch on quicker than others.

Fun Fact: When you wear a Billionaire Boys Club jacket you always win even when you lose. I’m guessing this was a special gift from Pharrell since it can’t be found anywhere on the clothing line’s site.

Much RESPEK for paying tribute to the great Reggie White and his No. 92 jersey. Outstanding move.

Fresh Prince in the building 💧

So is this a nod to the Fresh Prince or is it Dwayne Wayne from “A Different World” due to the flip glasses? The best answer is probably “who gives a shit” but nevertheless, the internet was ablaze over it to the point someone actually used Dwayne Wayne’s middle name. Twitter hops on its high horse over the dumbest stuff. It’s the best.

Dude, this is Dwayne Cleofis Wayne from "A Different World"

Not the Fresh Prince… https://t.co/8AMdK1pV5s 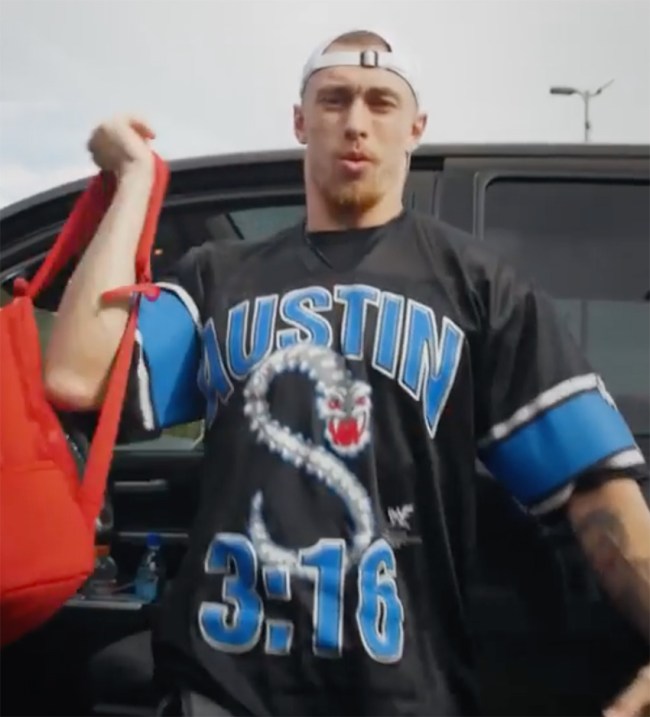 Felt like this pregame effort from Kittle deserved its own slot. Last week it was a vintage “Brahma Bull” Rock jersey. This week it’s an “Austin 3:16” jersey. Keep it goin’, George. By all means, keep it goin’.

Saying goodbye to the Packers wasn’t exactly upsetting, but bidding farewell to Aaron Jones and his sombrero is quickly becoming an emotional rollercoaster, so we’ll do it justice and feature it twice.

“It’s cool man, got red bottoms on… Life is good, you know what I mean?”

OK, so maybe it’s a three-way tie for the Rookie Fashion Throne thanks to Deebo Samuel and his never-ending thirst for top-shelf showmanship. He’s lucky almost all of this stuff is probably free because I’m not sure a rookie contract could even cover the cost of that watch. 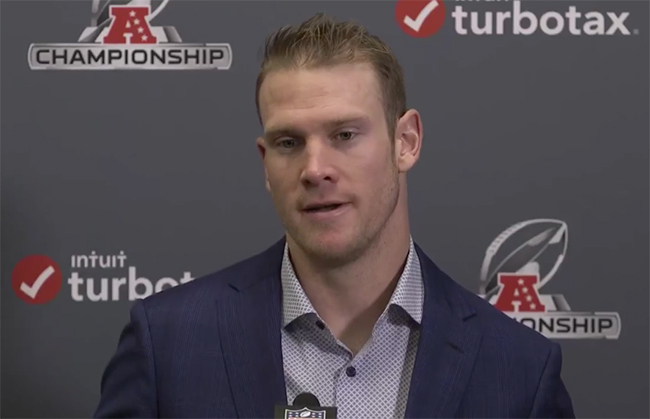 What a glow-up of a season it’s been for Ryan Tannehill, who went from a guy that often looked like he was mere moments from starting a brawl in a pool hall to a supreme professional and more than capable NFL quarterback.

I beat the odds a long time ago #smash #baltimore #blessed

Simple yet profound at the same time. As the caption says, Amos “beat the odds a long time ago.” And no, just because he hails from Baltimore does not mean a reference from “The Wire” is required. That shit got stale eight years ago.

Zero catches for zero yards does not take away from the fact that this outfit is an easy 10/10.

Taylor Lewan has always been a personal favorite of mine ever since he mocked Josh Norman’s bow and arrow celebration right in his face. Given that Sunday was his final appearance of the season it only feels right to lure him out of that collage and celebrate his commanding presence.

Next stop? A sitdown with Dalton at the Double Deuce. 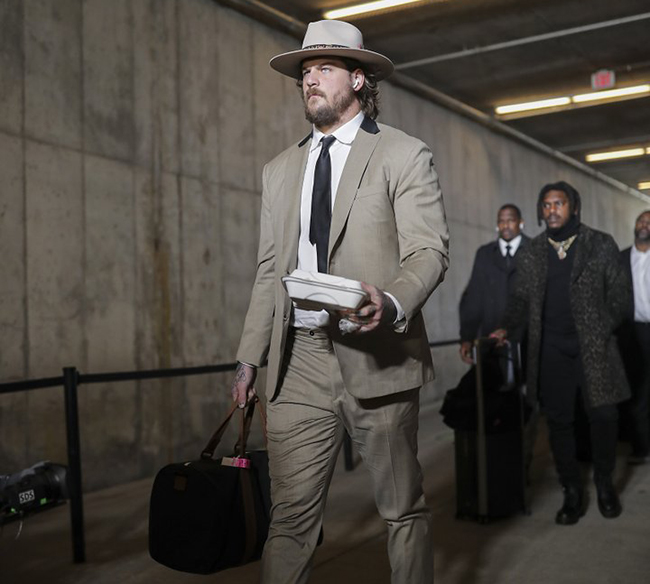 The “Snubbed” t-shirt on Za’Darius Smith certainly warrants a mention.

Is Titans defensive lineman Jurrell Casey wearing pricey earbuds or does he have front row seats to Metallica? Honestly have no idea what’s happening there.

The 49ers placed wide receiver Marquise Goodwin on season-ending injured reserve in December but he still shows out each week like he’s averaging 11 touchdowns a game. Dedication to “the game” at its very finest.

Did anyone know it was Fashion Week in Milan this past week? Neither did I. But in last week’s installment, I made a joke about Kenny Stills boarding a private jet to Milan with his team of stylists to discuss next season’s “strategy” and boy did that turn out to be quite the prescient thought.

Here’s the photo that kickstarted a reality:

As many, many people are saying, NAILED IT.

Kinda wish Gurley had zipped up his jacket so we could get a good look at that haunting skull that features a pink brain sitting atop.

As you’ll soon see when you scroll down a little, if Tyrod Taylor spent as much time as he does on his endless wardrobe he would probably have 10 Super Bowl rings. That said, this dude is seriously on another level.

If Diggs’ jacket is supposed to look like this, I’d like to speak with the designer. Immediately.

Quite possibly the most heroic, herculean, ELECTRIC effort of the year. I can’t look away.

Can’t stop, won’t stop, and I hope he never stops. Those Nike SB Dunks are even better than I initially thought.

Yeeeah, let’s not do this one again, Antoine.

At long last, photographic evidence that Odell Beckham actually hung out with someone other than himself during the National Championship game.

#Eagles #RodneyMcleod and Mrs. McLeod dressed to impress at #ParisFashionWeek 🔥🔥🔥

CONFIRMED: Every single player eliminated from the playoffs is in Paris right now soaking in all that fashion heat.

I’m not kidding when I say I would wear this and wear it like I own the whole damn city.