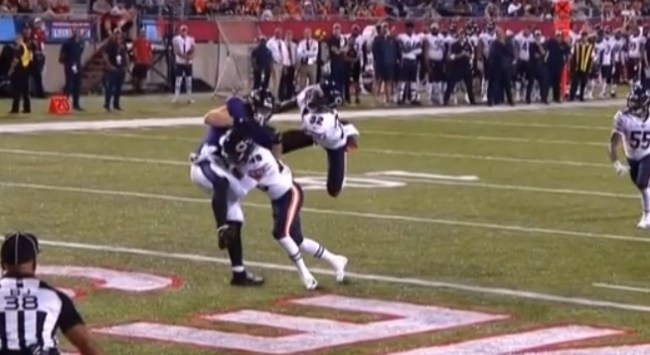 It’s going to be a long season if routine plays are called unneccessary roughness penalties in the NFL next season. In the second quarter of today’s Hall-of-Fame preseason game between the Ravens and the Bears, Bears defensive back Nick Orr made what used to be a routine play, lowering his head and diving into the Ravens receiver’s chest to break up a pass. NBC announcer Cris Collinsworth noted that this is a penalty under the new helmet rules adopted by the NFL this offseason.

Of course NFL fans were not pleased with how the new rule was being enforced.

If Nick Orr’s hit is the new definition of the helmet contact rule it is a very poorly designed rule. Also #ProFrogs #GoFrogs #GoProFrogs

You thought the catch rule would be the most subjective and random and impossible to adjucate rule the NFL ever put in and all of sudden targeting shows up.

It’s clearly the preseason for the refs too. Didn’t like the unnecessary roughness call on Nick Orr. I’m sure this new helmet lowering rule will lead to quick whistles/anticipation calls. #Bears #PFHOF18

NFL doesn't want defensive players to be on the field apparently.. Nick Orr was just hosed.

What used to be a highlight hit is now a helmet flag. Nick Orr grabs the penalty for the #Bears.#Ravens first and goal.

It’ll probably take some time to getting used to the new rule but man that’s crazy.