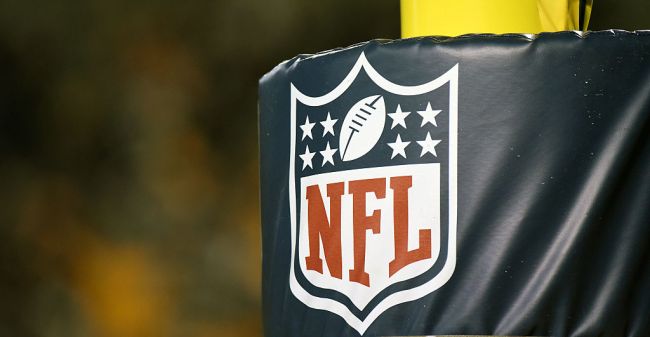 The National Football League has finalized its new media rights deal and it’s changing the landscape of television media. All of the previous TV rights are being renewed with all of its existing broadcast partners with one notable addition— Amazon Prime Video will be the league’s exclusive partner for its Thursday Night Football package. That means TNF can only be streamed on Amazon Prime for the foreseeable future, which completely goes against the announcement that it will provide “fans greater access to our games than ever before.”

Here's a look at viewership numbers from over the last five years… pic.twitter.com/t93rdN4BkW

The 11-year agreements run through 2033 and are worth over $100 billion. ViacomCBS, Fox and Comcast are all reportedly set to pay more than $2 billion per year for their packages, Disney will pay in the ballpark of $2.7 million for 23 games a season, and Amazon will pay about $1 billion for the exclusive streaming rights on Thursdays. By that math, the league will nearly double its media revenue to more than $10 billion per season.

This move comes amidst a free agency period that is unlike recent years. After the NFL and NFLPA agreed to an 8% decrease in the salary cap for 2021 earlier this month, the money is more tight. Free agents are signing shorter, smaller contracts with new teams and organizations are forced to cut long-time starters in favor of younger, lesser-paid players. Meanwhile, the league and its owners are getting richer than ever before with the new deal. Seems backwards, but then again, Roger Goodell is running the show so are we really that surprised?

Also included in the deal is a long-awaited, much-needed “Flex”-ability. Instead of having two terrible teams face-off on Sunday Night Football and Monday Night Football, there will be an increased ability to flex more meaningful games to primetime. Thank goodness.

Other interesting notes include more interactive and alternate broadcasts, like the Nickelodeon game, and the Super Bowl schedule. CBS, NBC and Fox will each have three of the big games, while ESPN/ABC will air its first Super Bowls in 2026 and 2030. This is great. Give us all of the touchdown slime cannons!!!

The most important piece of the agreement, however, is the increased digital distribution. Amazon Prime, ESPN+, Paramount+, Peacock and FOX Digital Platforms — in addition to NFL Mobile and digital platforms — will air the games. This is a game changer for the NFL, but even more so for the way we consume sports and television as a whole.

Only a few years ago, streaming was part of the future. Now it is the future. As the market continues to expand, it is an arms race amongst the top media companies to get their content over to a digital platform. Cable is becoming obsolete and the only reason that it continues to be of any relevance is live events, with sports being the big one.

That was bound to change and this move by the NFL and Amazon is the first step. There is no other way to watch Thursday Night Football. You HAVE to sign up for Prime Video to watch. In the not-so-distant future, that will be the case for the rest of the games and eventually sports entirely. Thus, as traditional cable diminishes, bundles will be key.

For example, a bundle might include three streaming platforms for $20 a month. Instead of paying for the three individually, you can get them all together for a lesser price. In regard to sports, it’s very easy to imagine a “sports bundle” that gives you all of the services you need to watch every game, without the added non-sports services like Netflix. The NFL is the first professional sports league to make a deal like this, but as the NBA, MLB, NHL, MLS, etc. have their deals come up for renegotiation, the standard is set.

As is the case with anything, people are not happy.

@NFL @nflcommish are you going to reimburse all cable TV subscribers for an additional Amazon prime subscription to watch Thursday Night Football? This is absolutely ridiculous.

So we need Amazon tv to watch Thursday night football????

Yeah nfl you messed up with that one. We all about to stream it without Amazon tv

I am not an Amazon fan. If I'm that desperate, I'll order from Walmart.

As a football fan, this absolutely enrages me.

After Colin, now this. It's time to revisit the value of the @NFL

The richer get richer, thanks for taking away TNF to billions of ppl around the world. NFL and Amazon are 2 of the most money hungry corporations in the world making ppl pay to watch TNF smh. I hate u amazon 😡 https://t.co/nE4ztcSo4b

Well, so much for watching the majority of Thursday night NFL games… "For the first time, Amazon will be the exclusive home for Thursday night games, which will also be on over-the-air channels in the competing teams' home markets." 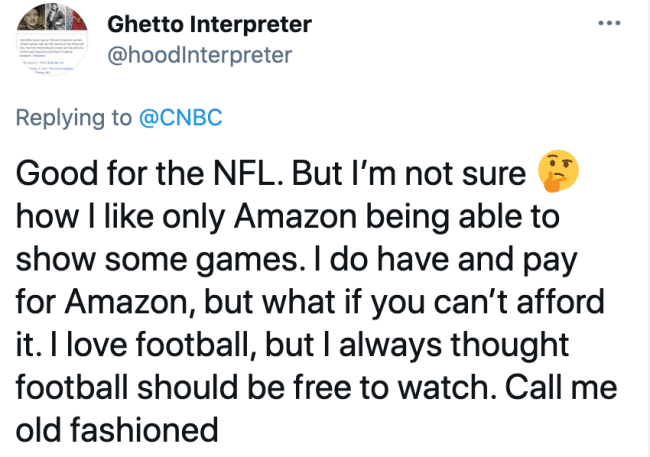 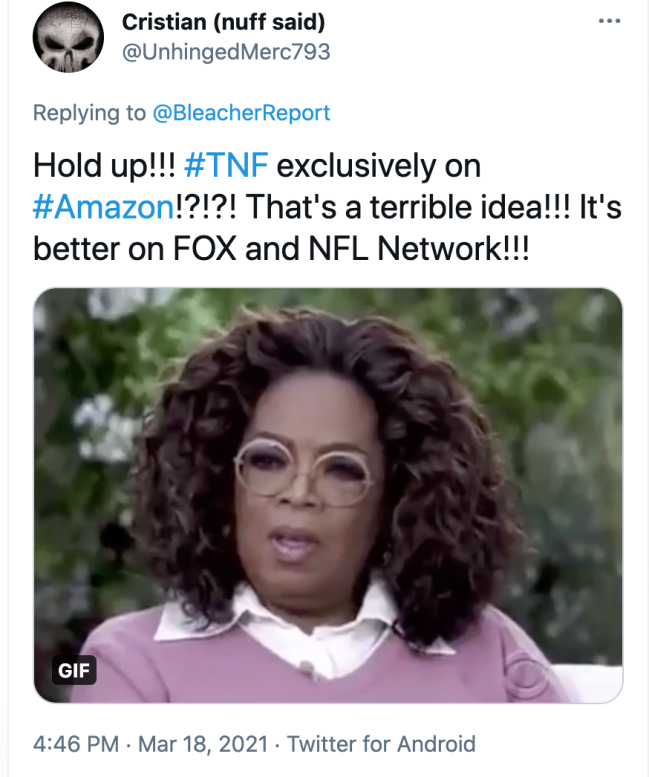 Welcome to the future, it is here.