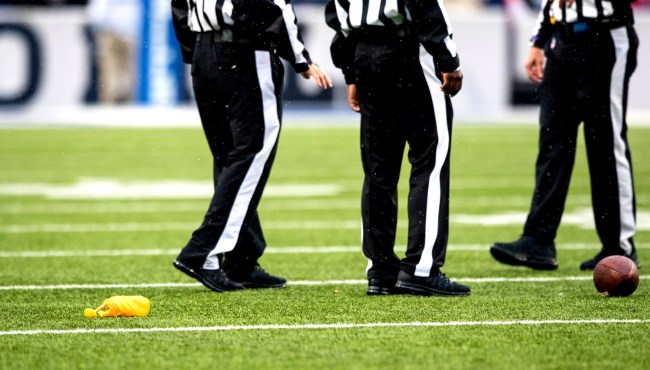 This week the NFL reportedly sent teams a new memo, and video, re-emphasizing the new taunting rules and reaffirming that it is, in fact, the No Fun League.

From weeks 1 through 7 there were 19 penalty flags thrown for taunting. In weeks 8 through 10, there were 16.

The NFL would apparently like to see that controversial trend continue.

According to Kevin Seifert of ESPN.com, in the video that accompanied the memo, Senior Vice President of Officiating Training and Development Walt Anderson told NFL teams, “Appropriate celebration, enthusiasm and sharing great moments with our teammates and fans is encouraged. The emphasis by the NFL to discourage acts of taunting or disrespect, when you direct actions toward an opponent or his bench, will continue. Officials are instructed to call fouls on actions that demonstrate that disrespect.”

He continued, “Avoid any actions where you approach an opponent or his bench and gesture, posture or otherwise demonstrate any verbal or physical form of disrespect. Turn away. Take the opportunity to celebrate with your teammates and don’t put officials in the position of having to make a judgment about whether or not your actions rise to the level of a foul. Remove all doubt and don’t put yourself or your team at risk of a penalty.”

“Appropriate celebration, enthusiasm and sharing great moments with our teammates and fans is encouraged,” NFL senior vice president of officiating training and development Walt Anderson said in an accompanying video. “The emphasis by the NFL to discourage acts of taunting or disrespect, when you direct actions toward an opponent or his bench, will continue. Officials are instructed to call fouls on actions that demonstrate that disrespect.”

Much like Washington coach Ron Rivera, Anderson says the NFL is just trying to think of the children.

“When our youth see us making a great play and then showing up an opponent that sends the message to them that such behavior is OK. But that is not the message that we want to promote for our great game,” said Anderson.

Needless to say, reactions by NFL fans on social media to this ridiculous point of emphasis by the NFL were not terribly positive.

So the NFL really decided to just ignore *everyone's* complaints and go on with this terrible nonsense. https://t.co/aAqTJEbBtZ

@NFL the #NFL needs to stop worrying about people getting their feeling hurt and remember they are grown men playing football!!!!! Really taunting because you flex looking at the the other sideline?? Enough already I want FOOTBALL back!

Sounds like its a power play. The league knows they are losing power with these stars in the NFL so they created a sense offense. Calling fouls on human emotions is a crime in the game. We are humans not robots! Get rid of taunting penalties or get rid of the NFL.

Considering NFL officiating on the whole has been - to be nice - suspect at best, maybe the NFL should worry more about getting more game-oriented calls correct instead of this. 🤷‍♂️

Many other fans, however, are all for the NFL’s taunting crackdown.

Were games any less emotional in the 70s? In the 80s? We didn't have outbursts after every play, sack TD. NFL is becoming more like WWE, so I think they're right

Every Sunday have to watch these morons do ridiculous staged celebrations - enough. These idiots make millions to play a game for the fans why do we need to sit thru their self gratifying celebration.. they are at work, high five your team mates then get back to work