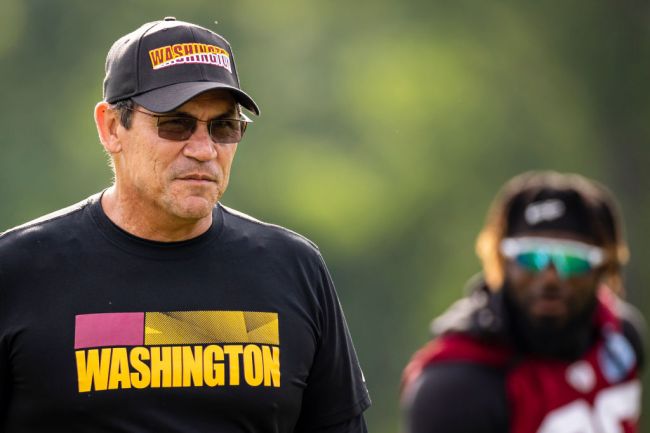 Washington Football Head coach Ron Rivera believes the NFL needed to start cracking down on taunting, therefore, he’s on board with the league’s new rules against taunting. He’s certainly in the minority there given how strict and downright absurd the new rules are.

The NFL recently released a memo explaining that enforcing taunting penalties were going to be a point of emphasis this season. The memo stated that several coaches complained about players taunting last year during meetings with the competition committee earlier in the offseason. If a player receives two taunting penalties he will be ejected from the game.

We saw the league’s new taunting rules in full-force during the Colts-Panthers preseason game when Benny LeMay was flagged after he flexed ever so slightly after an impressive run.

Taunting is a huge emphasis by the referees this season. Benny LeMay with great effort. However, he was flagged for taunting after the pay.

While Rivera didn’t directly comment on the flag thrown on LeMay, it’s safe to say he has no problem with that penalty being called based on his recent comments in favor of the new rules.

For Rivera, it’s all about protecting the kids. He rather dramatically explained to the media that “we don’t need the young people to see” NFL players taunting one another.

Washington HC Ron Rivera on why there's an emphasis on taunting: Says they simply don't want it towards another player which could then escalate into something much worse. Also says it's not a good look and pop warner/peewee football kids shouldn't have to see that from the NFL. pic.twitter.com/TabrEHD0vx

In Rivera’s mind, that’s what this is all about, protecting young fans from seeing players taunting so maybe they won’t go and taunt during their own games.

I’m going to go out on a limb here and say that kids are still going to taunt one another at every single level in football, regardless if NFL players are getting flagged for it or not.

After a big play, players celebrate. That’s how things have been done forever and they’ll remain that way. NFL players may have to adjust given the new rules, but youth football players aren’t NFL players.

Keep it respectful, of course, but taunting is part of sports and provides new energy to the game at hand.